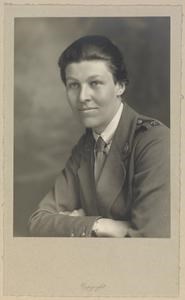 During the First World War, Beatrice served initially in the British Red Cross as a volunteer worker from 29th October 1915 until 20th July 1917, in their Head Quarters at The Central Work Rooms, Royal Academy of Art, Piccadilly, London.

She then joined Queen Mary’s Army Auxiliary Corps as an Assistant Administrator and served in France.   Realising the importance of keeping a record of events, Beatrice wrote to her superiors suggesting that she be permitted to paint some of the things she witnessed.  In February 1919, she was officially commissioned to paint the WAACs in France.  On 3rd June 1919, Beatrice was promoted to Unit Administrator.

After the death of her father on 14th February 1936, by which time he had been knighted, Beatrice set up a studio in Wantage, Berkshire.  By 1939, she was living at The Dower House, Waltham Cross, Essex.

Beatrice served again as an Army Officer during the Second World War.  She was awarded an M.B.E. and later an O.B.E.

As she grew older, Beatrice concentrated on landscape paintings. She died at The Guildry, Belmont, Wantage, Berkshire on 25th July 1966

Sources: Find my Past and

Photo from the Collection at the Imperial War Museum, London, UK