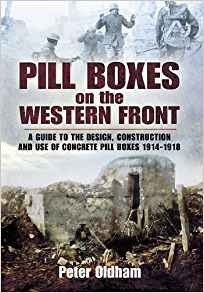 In the UK, we still see quite a few pill boxes that were used for home defence during the Second World War but I did not realise that pill boxes were in use during the First World War!  This wonderful book puts that right.  More than that, reading it was like finding some lost pieces of jigsaw puzzle – the history of WW1 now makes far more sense to me.

After the general introduction, Chapter One deals with the history of the use of concrete, which, something else I didn’t know, dates back to the ancient Egyptians, Greeks and Romans.  “With the departure of the Romans … the art of concrete making was forgotten.  The Saxons blended local limestone with burnt lime in about 700 AD…” (p. 9).  The build up of French and Belgian defences  following the Franco Prussian War is also covered.

Chapter Two deals with the German Schlieffen Plan and ‘the line of trenches from Nieuport on the Belgian coast to Pfetterhouse on the Swiss border.’ (p. 14).

Chapter Three, entitled “British Findings” explains the British High Command’s attitude to pill boxes, with their constant offensive policy which felt that “good shelter from shell fire would sap the morale of troops, who were better off in their wet trenches.  If British troops must have the luxury of strong concrete blockhouses, let them take them from the Germans”. (p. 21).  But the problem with doing that of course, meant the pill box was facing the wrong way!  The difficulties of supplying both German and British engineers with concrete are also explained in detail.

Chapter Four discusses different pill box designs, Chapter Five deals with camouflage (ingenious), Chapter Six is about Defence Lines and Chapter Seven Coastal Defences in Britain and Belgium. The book is also full of the most wonderful photographs of pill boxes, with very detailed plans and drawings of how they were made.  Also included is a Glossary of terms and a comprehensive Index.

There is an extremely important Guide to Pill Boxes and Bunkers still in existence on the British Section of the Western Front in a Chapter entitled “Gazetteer”.  This goes from page 119 to page 168 and is a must for anyone visiting the cemeteries and battlegrounds of WW1 from the Belgian Coast to St. Quentin in France. “Visitors to pill boxes, bunkers, observation boxes or shelters are reminded that many are on private land and this should be respected.”  Care should be taken because “… danger lurks about some bunkers through extruding steel bars, difficult exits, slippery footholds and the ever-present possibility of live shells and small arms ammunition.” (p. 120).

I was interested to learn that on 7th April 1918, Roberta McAlpine, daughter of Sir Robert McAlpine, whose construction company carried out a great deal of work for the British in WW1, married Major Richard Lloyd George of the Royal Engineers, whose Father was the British Prime Minister at that time.

Another interesting account quotes German writer, Erich Maria Remarque (“All Quiet on the Western Front”), who sheltered from a bombardment in a concrete shelter which “was able to withstand a direct hit, although cracking along all joints and filling with sulphur fumes.  Remarque was thankful that he and his comrades were not in one of the lighter, more recent dug-outs, in which they would not have survived.” (p. 78)

Peter Oldham has a wealth of experience to bring to the writing of this book, since he worked in the production and supply of aggregates and concrete to the building industry.  That explains his interest in the pill boxes of the Western Front.  I found the book utterly fascinating.  Although Peter goes into a great deal of detail describing the supply and construction of these defence structures, the book is not just about pill boxes.  Peter also explains in detail how the war came to last so long by describing the incredible lengths the Germans went to digging in, constructing and camouflaging their lines of defence.

A review can’t do justice to this fantastic book – I urge you to read it for yourself.  For further details, as well as information about all their wonderful books, check out the Pen & Sword website https://www.pen-and-sword.co.uk/