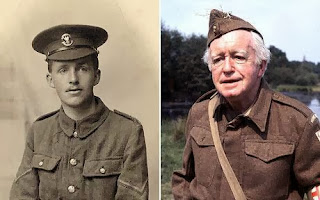 Arnold was born on 7th January 1896 in Wolcot near Bath in the UK.  Hi father was a gym instructor who also ran a boot and shoe shop.

After graduating from the University of Bristol, Arnold became a primary school teacher.  He also began his acting career in a play called "Prunella" at the Theatre Royal in Bristol.

In 1914, Arnold Ridley, who went on to achieve fame as a television actor, enlisted in the Somerset Light Infantry as a private.   Arnold fought on the Western Front, was promoted to the rank of Lance Corporal and took part in the Battle of the Somme in 1916.  He was wounded in the left arm and both legs by shrapnel and during a hand-to-hand action, a German soldier struck him on the head with a rifle butt.

After a varied career in acting and military service in WW2, Arnold starred in the UK television series about the British Home Guard during WW2  - "Dad's Army" - as Private Godfrey.   He died in 1984.