The Dover Patrol in the First World War

During the First World War, The Dover Patrol was based at Dover and Dunkirk with the task of blocking the way through the British Channel of German submarines trying to get through to the Atlantic, Mediterranean and Irish Sea.   They also had to try to protect and escort the enormous amount of shipping that crossed the Channel every day, taking passengers, troops, supplies and post to France and Belgium and bringing the wounded home in Hospital Ships.  They also had to sweep for mines and destroy German submarines.


The large German submarines were able to remain away from port for 25 days, while the smaller ones could remain away for 14 days.


In the early days of the war, the Dover Patrol consisted of old Tribal Class Destroyers with a motley group of vessels – trawlers, minesweepers – many of them paddle steamers – armed yachts, submarines, planes and airships.   By the end of the war, Britain had a fleet of modern Torpedo Boat Destroyers and a mined barrage was placed across the Channel that was illuminated at night.


The work and the men of the Dover Patrol is commemorated on memorials in Britain (St. Margaret’s Bay, Dover), France (Cap Griz Nez) and America (Fort Hamilton, New York) 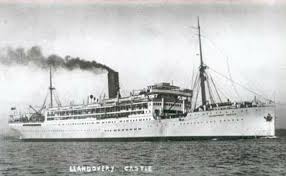 Built in 1914 for the Union Castle Line, which had been taken over by the Royal Mail
Line in 1912, the Llandovery Castle was converted for use as a hospital ship during WW1.


She was in use by Canadian forces and was on her way from Halifax, Nova Scotia, Canada to Liverpool, when she was torpedoed and sunk by a German submarine on 27th June 1918 off the coast of Southern Ireland.


At the time, firing on a hospital ship was against International Law so one wonders what went through the mind of the Captain of the submarine, Helmut Brűmmer-Patzig when he surfaced, ran down the lifeboats and machine-gunned survivors.


Only twenty-four people managed to survive the horror to be rescued by the British Destroyer HMS Lysander and tell the world of the war crime.   234 doctors, nurses and patients, plus ship’s crew were killed.


After the war, under the terms of the Treaty of Versailles, trials were held in Leipzig of Germans alleged to have committed war crimes such as mistreatment of prisoners of war, crimes on the high seas and against civilians and non-combatants.   The Leipzig Trials were a first attempt at bringing the perpetrators of war crimes to justice.   They were held between 23rd May and 16th July 1921.


Unfortunately, Commander Brűmmer-Patzig, the captian of the submarine that sank the Llandovery Castle, was not among them as he had fled the country.  His two First-Lieutenants Ludwig Dithmar and John Boldt, were initially found guilty but acquitted after an appeal as having merely obeyed their Captain’s orders.

For a post regarding the nurses, please see http://inspirationalwomenofww1.blogspot.co.uk/2014/07/canadian-nurses-lost-at-sea-hmhs.html
Posted by Lucy at 03:49 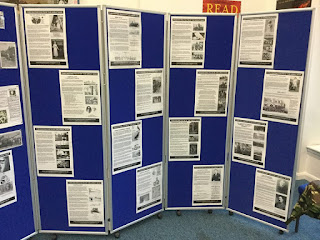 I have been working with Ian Inglis of the Mobile Military Museum in Scotland and sending him panels via e-mail for display.  Ian has just sent me a couple of photos of his most recent display. 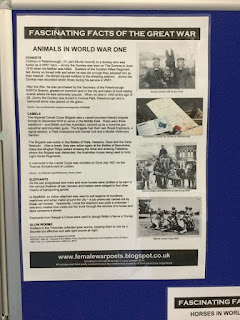 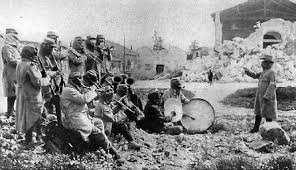 
Leslie Henson was born in Notting Hill, London in 1891.   Henson joined the Royal Flying Corps during the First World War.  However, he was soon ordered to form a concert party – ‘The Gaities’ – to entertain the troops on the Western Front.   After the war, Henson published his account of his time on the Western Front in a book entitled   ‘My Concert Party at the Front – How the ‘Gaities’ cheered the troops’.

One person who attended, and was impressed by, one of those concert parties was a young Charles Laughton who joined the Army in WW1 and served on the Western Front in the 2/1st Battalion the Huntingdonshire Cyclists and later the 7th Battalion the Northamptonshire Regiment.

During WW2, following a successful tour of South Africa, Henson returned to Britain to form the Entertainments National Service Association, known as ENSA, with Basil Dean.  ENSA was sponsored by the British Government to entertain Allied troops the world over.