Commemorating The Centenary Of The Death Of Isaac Rosenberg 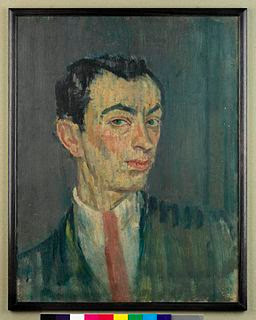 Sunday, 1st April 2018 marks the Centenary of the death of the poet and artist Isaac Rosenberg, who was killed at Fampoux, north of Arras on the Western Front.


Isaac's great-niece, writer and poet Robbi Nester, who lives in America, has written a special poem dedicated to Isaac which she recorded.


David Windle, Director of Music at Blackpool Tower Circus, has given us his permission to use the piece of music he wrote in memory of the violinist Hugh Gordon Langton, who was killed at Passchendaele on 26th October 1917, to use with the poem.


Clive Bettington is organising a commemorative walk in honour of Isaac Rosenberg on 1st April 2018 called "The Whitechapel of Isaac Rosenberg", which starts at 11am from Aldgate Tube Station. Tickets are by donation (suggested amount £10) from Clive  clivebettington@lineone.net.

Robbi Nester, MFA and PhD from University of California, Irvin, is the great-niece of poet and painter Isaac Rosenberg. She is the author of three books of poetry, a chapbook, Balance (White Violet, 2012) and two full collections: A Likely Story (Moon Tide, 2014) and Other-Wise (Kelsay, 2017). She also edited two anthologies of poetry, The Liberal Media Made Me Do It! (Nine Toes, 2014) and  an Ekphrastic e-anthology, Over the Moon: Birds, Beasts, and Trees--celebrating the photography of Beth Moon (accessible at http://www.poemeleon.org/over-the-moon-birds-beasts-and). Her poetry, essays, articles, reviews, and interviews have been widely published in journals and anthologies, as well as on websites and weblogs.

David Windle, who studied classical organ at Huddersfield School of Music (now University), previously worked as Musical Director for P & O Cruises (Oriana) and as Deputy Musical Director/Band Leader for Cunard (QE2), was inspired to compose a piece of music with a violin cadenza in honour of Hugh Gordon Langton.  He has called the piece "Carmen Milita" or  “Langton’s Theme”.  Singer Lynne Fox produced a short video to accompany the music David composed: https://www.youtube.com/watch?v=3iOho4c_bJg&feature=player_embedded


The local brass Band at Harelbeke near the cemetery in Belgium where Hugh lies have also composed a piece of music which they play every year at Hugh’s graveside. For further information about his composition, please contact David Windle on circus2016@outlook.com

BOOK REVIEW: “Led by Lions: MPs and Sons who fell in The First World War” by Neil Thornton, published by Fonthill Media Ltd., 2017 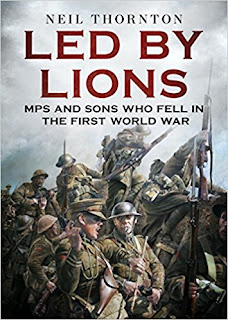 In this extremely interesting book, Neil Thornton writes about the Members of Parliament who served in the Armed Forces during the First World War who were killed or who died, as well as the Members of Parliament who were too old or infirm to serve and whose sons were killed during the conflict.  Beginning with the Introduction, in which the origin of the phrase “Lions led by Donkeys” is explained, the book is divided into two sections – MPs and sons of MPs - in alphabetical order with date and place of death and where they were buried.   Also included are photographs, a list of the members of staff of the House of Commons, extensive notes and a bibliography.


Due to my own research into the First World War, I was particularly interested in the different theatres of the conflict – Palestine, Egypt, Gallipoli, Jerusalem – and the different services i.e. not just the Army but also the Royal Naval Air Service, Royal Navy, Royal Flying Corps – in which the men served.  I also like the way Thornton mentions the First World War service of some of the mothers, wives, sisters, etc. of the men, as they are so often overlooked. And I was pleased to see two of the Forgotten Poets of WW1 on my list – Tom Kettle and Raymond Asquith – included.


With a Foreword by John Bercow, Speaker of the House and a Preface by the Hon. Ian R.K. Paisley, Jnr., Member of Parliament for Antrim, I think  you will agree with me that this hard-to-put-down book is a very welcome addition to the library of anyone truly interested in the history of the First World War.
Posted by Lucy at 03:29 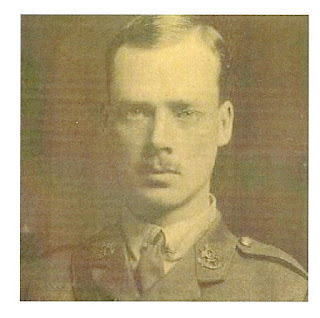 Remembering Theodore Percival Cameron Wilson who was killed 100 years ago.  T.P. was born in Paignton, Devon on 25th April 1888.  His parents were Theodore Cameron Wilson, Vicar of Christ Church in Paignton, and his wife Annie Fredeline Wilson, nee Smith.  T.P.’s siblings were Christopher, b. 1883, Mary, b. 1885, Alice, b. 1889, John, b. 1890 and Charles, b. 1899.   The family moved to Little Eaton in Derbyshire, where T.P.’s father became rector of Little Eaton Parish Church St. Paul’s.  Charles and Mary also became writers – Mary wrote under the name of Marjorie Wilson.


After studying at Oxford, T.P. left without a degree in 1907 and became a primary school teacher at Mount Arlington preparatory boarding school in Hindhead, Surrey.  One of his pupils was the son of poet Harold Monro who founded the Poetry Bookshop in London and encouraged aspiring poets.  T.P. and Harold became friends. T.P.’s novel “The Friendly Enemy” was published in 1913.


In August 1914, T.P. enlisted as a Second Lieutenant in the Grenadier Guards. Transferred to the Sherwood Foresters, he was a Captain at the time of his death on the Western Front during the German Spring Offensive on 23rd March 1918 at Hermies, France.  He has no known graves and is commemorated on the Arras Memorial and on the lynch gate at St. Paul’s Church, Little Eaton, Derbyshire.


“Magpies in Picardy” was published by the Poetry Bookshop, London, with an introduction by Harold Monro, in 1919.


The full text of those poems, some of which, including T.P.’s most famous poem, “Magpies in Picardy”, were published in “The Westminster Gazette” “The English Review” and “Poetry and Drama”.  His poems were included in 12 WW1 poetry anthologies. 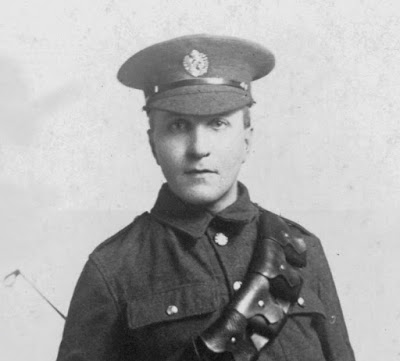 Colin featured in the Somme Poets exhibition held at The Wilfred Owen Story in 2016 but we could not find a photograph of him.  Now we have – with many thanks to Catherine Avak.


Born in Mere in Wiltshire in September 1890, Colin was the youngest of eight children – six boys and two girls. Colin’s father, John Thomas Mitchell was a farmer, and his mother was Emma Jane Mitchell, nee Parsons.


Colin was educated at Shaftesbury Grammar School as a boarder. While there, he won a prize fo...r English Literature. He was interested in amateur dramatics and music and on leaving school became a bank clerk.


Colin joined the 8th Battalion of the Rifle Brigade during the First World War and was killed in action on 22nd March 1918. The 8th Battalion of the Rifle Brigade (together with the 7th and 9th battalions) was part of the 41st Brigade of the 14th (Light) Division of XV Corps which saw action at Ypres and on The Somme. At the time of his death, Colin was a Sergeant. Colin is commemorated on the Pozieres Memorial in Ovillers-la-Boiselle, France and in Mere Cemetery in Wiltshire.


Colin’s poetry collection was entitled ‘Trampled Clay’ and was published in 1917 by Erskine Macdonald, London.


He also had a poem included in ‘The Malory Verse Book’ edited by Editha Jenkinson and published by Erskine Macdonald in 1919.


‘Twas there we faced the flames of liquid fire.


Hooge! That shambles where the flames swept ruddy:


A spume of heat and hate and omens dire;


A vision of a concrete hell from whence


Emerged satanic forms, or so it seemed


To us who, helpless, saw them hasten hence.


Scarce understood we if we waked or dreamed.

“Stand To! Stand To! The Wurtembergers come!”


And boastful threats to kill they voice, while some,


In uniforms of grey and scarlet dressed,


Wear flame-projectors strapped upon their backs.


How face a wall of flame? Impossible!

“Back, boys! Give way a little; take the tracks


That lead to yonder wood, and there we’ll fill


Such trenches as are dug, and face the foe,


And no Hell-fire shall move us once we’re there.


Back and yet back, leaving good strongholds bare,


We’ll save our lives, perhaps, but not our name.


There’s no one in this well-trained company


Who’d save his skin and perjure his good fame.”


The shells are raining down amidst the trees,


In dire proximity to us. The breeze


Are crawling, white-lipped, to a dug-out where


The doctor in a drip of sweat seems framed,


So hard he works to hide the horrid stare


Of wounds adrip; while many pass away,


And need no lint to bind their frailty,


For God has ta'en them; 'tis their triumph day,


And all their sins shall expiated be.

Thus are we thrown in Life's great melting-pot,


Humanity much matrixed; but the ore,


Looms purer when the crucible is hot:


'Tis on this truth that we should set our store
Posted by Lucy at 13:30

Exhibition of Poetry written by Schoolchildren during WW1 at the Wilfred Owen Story in Birkenhead, UK 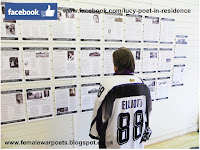 My latest exhibition, which features Poetry Written by Schoolchildren in the UK during the First World War, is now on display at The Wilfred Owen Story in Argyle Street, Birkenhead, Wirral, UK.  The exhibition was opened on 17th March 2018 (the day before Wilfred Owen's birthday) and a bust of Wilfred Owen sculpted by Anthony Padgett was unveiled on the same day by local MP Frank Field.  Here is a link to a BBC North West Tonight news report of the event: https://www.youtube.com/watch?v=78b40hAbqb8

The WOS is open from Tuesdays to Fridays from 12 noon until 2 pm (winter opening times) but it is advisable to phone first as the museum is manned by volunteers - 07903 337995.  Entry to the WOS is free.
The Wilfred Owen Story,
34 Argyle Street,
Birkenhead, Wirral, UK,
CH41 6AE
http://www.wilfredowenstory.com/
Panels from previous exhibitions held at the WOS, including that featuring some of the poets involved in the Battles of Messines (Mesen), Passchendaele and after in 1917, Poets of the Battle of Arras in 1917, Poets of the Somme 1916, Female Poets of the First World War, Inspirational Women of World War One and Fascinating Facts of the Great War, are available to view on file at The Wilfred Owen Story.  Other exhibitions are planned.


Photo of the exhibition panels taken by Paul Breeze of www.poshupnorth.com

Email ThisBlogThis!Share to TwitterShare to FacebookShare to Pinterest
Posted by Lucy at 06:29