A Teddy Bear in WW1

From Paul Simadas via Facebook 10.6.21 and shared with his kind permission. 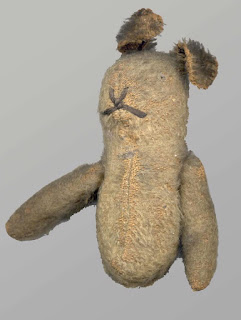 “Tell Aileen I still have the Teddy Bear and will try to hang on to it for her. It is dirty and his hind legs are kind of loose but he is still with me.” Wrote Lawrence Rogers, 5th Canadian Mountrd Rifles (the Quebec Regiment) in a letter to his wife September 1916.
Aileen Rogers, of East Farnham Quebec in Canada, was a ten year-old Canadian girl who had contracted polio at a young age which affected her ability to walk for much of her adult life. When her father, Lawrence Browning Rogers, enlisted in the Canadian Expeditionary Force in 1915 to fight in the Great War, she sent her beloved teddy bear overseas to help protect him.
Lawrence served initially as a medic in the 5th CMR and was awarded the Military Medal for bringing in wounded near Sanctuary Wood in Belgium. He was later commissioned as a Lieutenant and undertook regimental service in the 5th CMR as officer-in-charge Stretcher Bearer parties.
Despite the good-luck provided by his daughter’s bear, Lawrence was killed in action at Passchendale in late 1917. When Lt. Roger’s body was recovered by his comrades, the bear was found in one of his pockets. The bear was returned to his family in Quebec and was treasured by Aileen for many years.
Aileen went on to graduate as a registered nurse from the Montreal General Hospital School of Nursing. Her distinguished nursing career culminated in her appointment as head of health services at McGill University. Aileen lived in Montreal until her death on June 20th 1998.
Several years later, Aileen’s daughter, Roberta Rogers Innes, the granddaughter of Lawrence, found an old briefcase. Inside was the beloved teddy bear, along with collected letters and other war memorabilia. Roberta subsequently donated the teddy bear to the Canadian War Museum, where it is now one of the Museum's most beloved artifacts.
A book telling this poignant story has since been published: “A Bear in War” by Stephanie Innes and Harry Endrulat, illustrated by Brian Deines.
Pictures of the teddy bear, of Lawrence as a medic in WW1 and of Aileen as a RN in her post-war nursing career.
Lest we forget

repatriation of American service personnel who were killed or died serving on the Western Front during the First World War.

An article by Michael E. Ruane in “The New York Times” of 30th May 2021, informs us about a book telling the story of the repatriation of  the bodies of American service personnel who were killed or died serving on the Western Front during the First World War.  I did not realise there were so many - in the region of 100,000 - nor that this was such a huge post-war operation.

It must have been harrowing and arduous work to try to find, disinter and identify the bodies of those whose families chose to have their bodies taken home.  The task was undertaken by 6,000 African American soldiers in labour battalions.  Conditions for those involved must have been appaling, for we know from the words and paintings of Canadian artist Mary Riter Hamilton of the terrible state of the Western Front once the fighting had ended.  Mary lived for three years in that desolate landscape, in a tin hut.  Nearby were membes of the Chinese Labour Corps who undertook the task of clearing the area following hostilities.