“It is our most earnest hope that when the poppy petals fall at the Service of Remembrance in the Albert Hall each November, people will realise that some of them fall for generals.” (p. xii) 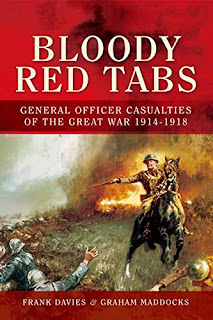 This book firmly knocks on the head the often-quoted phrase referring to the British troops of the First World War as “Lions led by Donkeys” and tells us about the many ‘top brass’ who lost their lives during the conflict, “putting the record straight and doing justice to the memory of the senior officers who have been unable to fight back for so many years.”

I was particularly interested in reading this book because my Grandfather was an “Old Contemptible” with the Royal Field Artillery.  Having joined the British Army as a Boy Soldier when he was 16, by August 1914 Grandfather was a Sergeant and was married with two children.  Due to the very heavy losses among the Officer ranks of the British Army in the early days of the war, Grandfather was actually commissioned as an Officer in November 1914 - that would never have happened to a working-class man during peacetime.

Frank Davies and Graham Maddocks have drawn on a wide variety of resources to put together this excellent book.   You will find out that, contrary to popular modern belief (it seems the myth about officers may have come from comments made by David Lloyd George in his “War Memoirs” – Chapter 2), many senior officers were killed in the line of duty during the course of the war.  I must admit I was surprised to find out that in 1915, British Army Officers were actually ordered to remain behind the lines as much as possible.  "...Haig had decreed in 1915, as GOC 1st Army, "That no staff officer was to go nearer to the trenches than a certain line" This was because of the danger involved for difficult-ro-replace Staff officers". (page 6).  Nevertheless, many were killed.  You will also discover just how 'safe' the chateaux used as headquarters really were and how many Generals were awarded the Victoria Cross (V.C.).

I found an enormous amount of extremely interesting material in this book and I don’t want to give too much away as I really want you to read it.  Following two chapters setting the scene are two further chapters listing the Generals who were killed, wounded, gasses and/or taken Prisoner of War.  Appendix 1 lists the cemeteries where the Generals are buried;  a comprehensive list of abbreviations is in Appendix 2 and Appendix 3 has a comprehensive Bibliography.  With copious photographs and a painting by WW1 artist Gilbert Holiday, who served with the Royal Field Artillery Western Front as a Forward Observation Officer and was later appointed Reconnaissance Officer on the front cover, this is another must read for anyone with an interest in the history of the First World War.

For further information or to order a copy of the book, please see the Pen & Sword website https://www.pen-and-sword.co.uk/

NOTE:  Eddie Bon tells me that the artist who painted the painting featured on the cover of the book  was Gilbert Holiday, about whom you can find out more on Lesser Known Artists of the First World War. 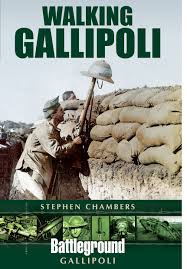 Written by Stephen Chambers, who is the webmaster of the Gallipoli Association, this book is from the Battleground series published by Pen & Sword and is one of several books Stephen has written about the Gallipoli Campaign of The First World War.
Due to the fact that none of my family members were involved in that theatre of WW1, I only recently became interested in the Gallipoli Campaign.  The main reason for my interest being because the WW1 soldier poet Rupert Brooke died on his way there and one or two other WW1 soldier poets were also involved.  And, although I knew about the British and Anzac involvement, I only recently became aware of the French Army and Navy’s involvement in the Campaign.  Over the years, I have read a great deal of criticism about the Gallipoli Campaign, however I feel it is unfair to criticise unless we have all the facts. In this book, Stephen Chambers sets the record straight about Gallipoli, before guiding us through a detailed walking tour of the battlefields in Turkey.
There is so much of interest in this book that I could write reams but I was particularly interested to read about the “Evacuation Trail”, featured on page 226.  Sub Lieutenant Ivan Heald of the Hood Battalion, Royal Naval Division (RND) was one of the poets featured in an exhibition of WW1 Aviator Poets held at Cosford Air Show in 2018.   I was fascinated to read that his poem “Evacuation” which you can read on page 227, was published in the “Liverpool Echo” newspaper on 19th February 1916.
I also appreciated the “Dangers” mentioned on page 244 as a warning for anyone visiting Gallipoli – “A lot of the area is still farmland and private property.” And “It is strictly forbidden by the Turkish authorities to remove any artefact from the battlefield”.  There is also a warning about ferocious dogs, wild boar and snakes.
This fantastic book really helps us to understand the Gallipoli Campaign of 1915 in WW1.   With wonderful photographs and maps, a detailed Bibliography and an Index listing the incredible number of different forces involved and the Victoria Crosses (VCs) awarded, it is another ‘must read’ for anyone genuinely interested in the history of the First World War and definitely for anyone planning a visit to Gallipoli.   For further information, or to order a copy, please see the Pen & Sword website https://www.pen-and-sword.co.uk/Walking-Gallipoli-Paperback/p/11183
“Walking Gallipoli” by Stephen Chambers (Pen & Sword, Barnsley, 2019).
Posted by Lucy at 08:24