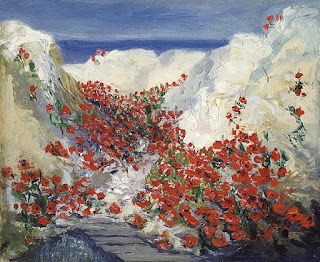 It seems that the phenomenon of those Flanders poppies, about which Canadian poet, artist, doctor and artilleryman Colonel John McCrae wrote (see Forgotten Poets), has been evident after every battle in the area over hundreds of years.

The British historian Lord Macaulay wrote in 1855 about the site of the Battle of Landen in the Province of Brabant. The battle took place in 1693, during the Nine Years War between the French and the English, when William III was on the throne.  Landen is in Belgium and is approximately one hundred miles from Ypres.  The French lost 9,000 men and the English 19,000:

John McCrae's WW1 poetry collection "In Flanders Fields and Other Poems" can be viewed here::  http://www.gutenberg.org/files/353/353-h/353-h.htm

Picture:  A painting entitled "Trenches on the Somme" by Canadian Artist Mary Riter Hamilton, who went to paint the aftermath on the Western Front in 1919. Mary's paintings were commissioned by the Canadian War Amputees Association and can be viewed on www.collectionscanada.gc.ca
Posted by Lucy at 04:29

WW1 Researcher Debbie Cameron sent me a poem written by Claude Edward Cole Hamilton Burton who, I discovered from Catherine Reilly’s “Bibliography of English Poetry of WW1” (St. Martin's Press, New York, 1978), used the pen-names Touchstone and C.E.B., respectively when writing for "The Daily Mail" and the London "Evening News".

The first of the Sportsman’s Battalions was formed by Mrs Emma Cunliffe-Owen and her husband Edward, with the support of Lord Kitchener.  Recruits were accepted up to the age of 45 and, after training, the Battalions saw action on the Western Front.