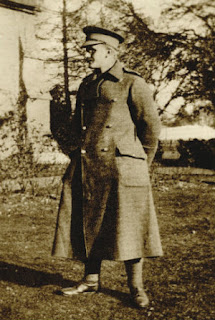 Osmund Bartle Wordsworth, who was related to the poet William Wordsworth, was born iin Glaston, Rutland on 17th May 1887.

When war broke out in 1914, Osmund was in Canada about to take up a teaching post.  Joined by one of his sisters, Osmund booked his passage home on the RMS "Lusitania".  He and his sister survived the sinking - Osmund gave his life-belt to another passenger.

Commissioned into the Oxford and Buckinghamshire Light Infantry as a 2nd Lieutenant, Osmund was killed on 2nd April 1917 near Henin-sur-Cojeul.  He is commemorated on Arras Memorial, Panel 10, on Winchester College's Roll of Honour, in the Chapel at Trinity College, Cambridge and in Salisbury Cathedral.

Osmund Bartle Wordsworth was one of the featured writers in the exhibition commemorating poets, writers and artists of 1917.  If you missed the exhibition, there is a book of the exhibition panels available from https://www.amazon.co.uk/Arras-Messines-Passchendaele-More-Writers/dp/1909643211/ref=sr_1_1?s=books&ie=UTF8&qid=1531395669&sr=1-1&keywords=messines+1917+lucy+london
From time to time people contact me via my weblogs with information for me to update my posts.  Tim Adair recently sent me this link that explains how the unmarked grave of Osmund Bartle Wordsworth in the Cemetery at Ecoust-Saint-Mien, France has now been identified due to DNA research.  This is indeed wonderful news. Read the report here:
https://apnews.com/article/france-world-war-i-4073492263b9f1b1b327157f474449df
Thank you so much, Tim.