A photograph of patients in Coulter Hospital London in 1915 from Philippe Clerbout, prompted a discussion about toy bears in WW1. 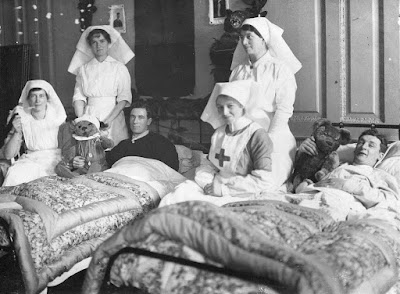 During WW1 J.K. Farnell (known as the 'English Steiff' by collectors) produced tiny 3.5in high bears which they called 'Mascot Bears'. They were given as gifts and taken to the Front by soldiers, as mementos of home and loved ones. Farnell began producing the bears in 1906.

The origin of 'teddy' bears - When US president Theodore “Teddy” Roosevelt was asked to arbitrate a border dispute between Mississippi and Louisiana in 1902, the governor of Mississippi Andrew H. Longino, hoping to curry favour, also invited him to take part in a bear hunt. Logino knew that Roosevelt was a fan of big-game hunting and had evenwritten a book on his hunting adventures in the wild west.

But when Roosevelt turned up for the hunt he was unable to bag any quarry, so Longino ordered the president’s men to capture a bear. They found a cub, ran it to exhaustion with their hunting dogs, clubbed it, then tied it up so the president would be unable to miss. But Roosevelt refused to take a shot, asking that the bear be put down humanely.

In 1902, Washington Post cartoonist Clifford Berryman depicted the incident showing a little bear with a rope around its neck and Roosevelt in the foreground refusing to kill it. The caption read “Drawing the line in Mississippi”.

The cartoon inspired Brooklyn sweetship owner, Russian Jewish immigrant Morris Michtom, to create a toy bear to decorate his shop window. He called it “Teddy’s bear”. Michtom and his wife Rose made stuffed animal toys as a sideline to their sweets business and were soon inundated with requests from customers to buy the bear.

The Coulter Hospital opened in September 1915 in a house in Grosvenor Square lent by Sir Walpole Greenwell (1847-1919). Accepted by the War Office as a primary hospital affiliated to Queen Alexandra's Military Hospital at Millbank, it had 100 beds for officers.  The rooms were large and lofty.  One of these was an 'Australian Room' and some of the beds were funded by Australian donors.  The medical staff were mostly consultants from Guy's Hospital and the Middlesex Hospital, but also included an Australian resident surgeon.  The nursing staff comprised 11 nurses, 6 of whom were Australian, and 10 members of a local Voluntary Aid Detachment, whose Commandant was Lady Juliet Duff (1881-1965).

The Hospital was founded by Mrs Charlotte Herbine, an American psychic from Indianapolis, who raised money to fund the hospital while visiting the Exposition in San Francisco.  The Hospital was named after Dr Coulter, the spirit of a family physician with whom Mrs Herbine had communicated with since she was a child.  Dr Coulter had directed her to go to England as he wanted to contact certain Englishmen.