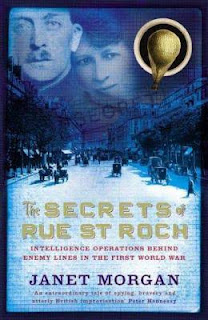 Among the inspirational women of the First World War on my list is Lise Rischard, an 'ordinary' housewife from Luxembourg.   Officially neutral in WW1, the people of Luxembourg had suffered greatly during the wars that ravaged Europe in the previous years.   Lise's son by her first marriage - Marcel Pelletier - was a member of the French Olympic Team send to the Olympic Games held Stockholm in 1912.

During a visit to her son who was in the French Army and in Paris before being sent to the Front, Lise was recruited to help the Allied cause. Her story is amazing as she travelled from the area  held by the Germans via Switzerland to Paris, which remained a free city during WW1 and then set up a network to provide vital information to the British.

I mention Lise in "No Woman's Land" but you can find out the whole amazing story in the book 'The Secrets of Rue St. Roch' by Janet Morgan (London: Allen Lane, 2004).
Posted by Lucy at 03:48 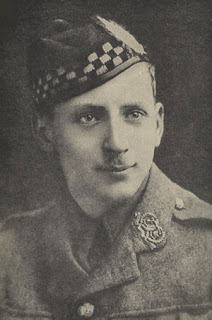 Harry Lauder, the Scottish comedian and singer, was in Australia on one of his tours when war broke out in 1914.  He returned home, began to raise money for the war effort and organised recruiting concert tours.  Harry also took his piano to the Western Front to entertain the troops.  He set up a charity called the Harry Lauder Million Pound Fund to raise money for seriously wounded Scottish servicemen.

On 28th December 1916, Harry's only son John Lauder, who was a Captain in the Argyll and Sutherland Highlanders, was killed at Pozières.   Harry wrote the song "Keep Right on till the end of the Road" in memory of his son.   Captain Lauder was buried at Ovillers, France and his father had a memorial placed in his son's memory in Glenbranter, the Lauder family home in Scotland.