The Steam Ship “Mendi”  was built in 1905 and launched in the June of that year. She belonged to the British and African Steam Navigation Company which was managed by Elder Dempster Lines.  Requisitioned as a troop ship during WW1 by the British Admiralty she sank on 21st February 1917.
At 05.00 a.m. on 21st February 1917, the Steam Ship “Mendi” collided in thick fog in the English Channel with the Royal Mail Packet Company’s Cargo Ship “Darro”.   646 lives were lost when the “Mendi” sank rapidly, being the smaller vessel.  The dead were mostly South African Soldiers.   WW1 Poet Samuel Edward Krune Mqhayi wrote a poem about the disaster.  “We will remember them…” 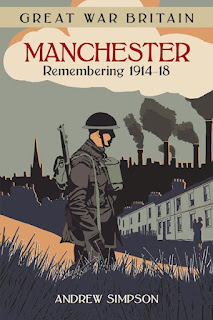 I was very interested indeed in the book “Manchester Remembering 1914-18”, because I began my research for a series of commemorative exhibitions with female poets of the First World War and among the first I found was Winifred Mabel Letts, who was born in Salford.   Due to her service with the Almeric Paget Military Massage Corps team as a remedial masseuse in Manchester, Winifred also comes into the category Inspirational Women.  So I found the descriptions of the temporary hospitals set up in the Manchester area to cope with the huge influx of wounded soldiers extremely informative.


I enjoyed reading about, among other things, the descriptions in the chapter entitled Out on the Town on page 20 of the entertainment on offer in Manchester during the early part of the twentieth Century.  It is all too easy for us to forget that, back then, there were no television or radio broadcasts and not every home had a telephone.


I was also interested in the social aspects of Manchester’s WW1 history – the role of women and the workers’ strikes (p. 76) which resulted in acts of parliament preventing strikes during the war years.  And a conscientious objector’s opinion on the film “Battle of the Somme” which premiered in London in August 1916, went on general release in August of that year and was seen by 20 million people in the first six weeks.


“Manchester Remembering 1914-18” also has a detailed timeline of the war years, beautiful illustrations with contemporary photographs – I had never seen a Wound Badge (page 84) - copies of posters, cameos about individual women and about soldiers in the Manchester Regiments (soldier poet Wilfred Owen was in the 5th  and 2nd Manchester Regiments), private letters and postcards sent to soldiers and civilians, chapters on the Armistice and aftermath, the legacy of the war and a postscript, plus notes on sources and a bibliography.  The book, written by former school-teacher Andrew Simpson, has been extremely well researched and is full of information about England’s second city, the very heart of the Industrial Revolution.


“Manchester Remembering 1914-18” by Andrew Simpson, published by The History Press, Stroud, Gloucester, 2017 is on sale at £12.99 and is available from all good bookshops and online at www.thehistorypress.co.uk


To find out more about Andrew Simpson’s work, check out his weblog on  www.chorltonhistory.blogspot.co.uk#
Posted by Lucy at 02:31