With thanks to Mr. S. Neal for permission to use his photograph of the grave of Thomas Mottershead in Bailleul Communal Cemetery, Bailleul, France, which he visited recently.

Thomas Mottershead was born on 17th January 1892. His parents were Thomas and Lucy Mottershead and they lived in Widnes in Lancashire, UK. Thomas and Lucy had six sons and three daughters. Thomas Junior was educated at Simms Cross School and Widnes Technical School.

Thomas studied engineering in his spare time while apprenticed to Widnes Alkali Works. On 10th February 1914, Thomas married Lilian M. Bree (known as Peggy) from Tranmere in Birkenhead, Wirral. They met when Thomas was working at the Cammel Laird Shipyard in Birkenhead. He had just started work in Portsmouth Naval Dockyard when the First World War began but he joined the Royal Flying Corps as a mechanic on 10th August 1914 and was posted to the Central Flying School in Upavon, Wiltshire. He was promoted to the rank of Sergeant on 1st April 1916. In May 1916, Thomas began training as a pilot.

In June 1916, he obtained his Flying Certificate and was posted to No. 25 Squadron at St Omer in France, flying the FE 2, on 6th July 1916. He saw action during the Somme Offensive. 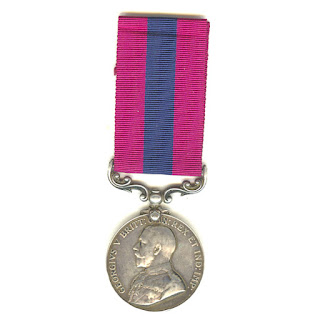 Established in 1854 by Queen Victoria as a decoration for gallantry in the field by other ranks of the British Army. It is the oldest British award for gallantry and was a second level military decoration, ranking below the Victoria Cross, until its discontinuation in 1993, when it was replaced by the Conspicuous Gallantry Cross. The medal was also awarded to non-commissioned military personnel of other Commonwealth Dominions and Colonies.

One of Thomas’s first operations was a low-level bombing raid on a German anti-aircraft battery, which he successfully destroyed. On 22nd September, with 2/Lt C. Street as observer he bombed the railway station at Samain, destroying one ammunition train and strafing another. While climbing away from their target, their aircraft was attacked by a Fokker scout. Accounts of the engagement indicate that it was Thomas's skilful manoeuvring which enabled Street to shoot the enemy aircraft down. For this action and other displays of gallantry, Sergeant Thomas Mottershead was awarded the Distinguished Conduct Medal and promoted to the rank of Flight Sergeant. He was then transferred to No.20 Squadron based at Clairmarais, Pas-de-Calais, France. 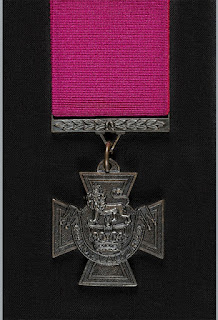 The Victoria Cross (V.C.) is the highest and most prestigious award of the British honours system. It  is awarded for valour "in the presence of the enemy" to members of the British Armed Forces and was introduced on 29 January 1856 by Queen Victoria to honour acts of valour during the Crimean War.

On 7th January 1917, near Ploegsteert Wood in Belgium, Thomas was on patrol in FE-2d (serial number A39) with observer Lieutenant W E Gower, when he was engaged in combat by two Albatros D.III of Jasta 8. Lieutenant Gower managed to hit one plane and put it out of the action, but the
second Albatros, which was flown by German 'ace' Lieutenant Walter Göttsch (who had 20 victories to his name), hit the British aircraft, piercing the petrol tank and setting the aircraft on fire.

Enveloped in flames which his observer was unable to extinguish with a handheld fire extinguisher, Thomas was badly burned but nevertheless managed to take his aircraft back to the Allied lines and make a successful forced landing. The undercarriage collapsed on touching down however,
throwing the observer clear but pinning Thomas in his cockpit. He was subsequently rescued but died of his burns five days later.  Thomas was buried in Bailleul Communal Cemetery, Bailleul, France.

Sergeant Thomas Mottershead was awarded the only Victoria Cross (V.C.) ever awarded to a non-commissioned RFC officer during the Great War. Thomas’s medal was presented to his widow by King George V in a ceremony in Hyde Park, London on 2nd June 1917.

A sum of nearly £1,000 was raised when an appeal was launched in 1917 – yet neither widow or son received a penny of the money collected. It was over 50 years later that a civil servant found the records of the fund and the money. It was then used to endow the Mottershead Scholarship at Widnes Technical College.

There is a memorial to the memory of Thomas Mottershead, VC in Victoria Park, Widnes, which was unveiled in April 2018.

"For most conspicuous bravery, endurance and skill, when attacked at an altitude of 9,000 feet; the petrol tank was pierced and the machine set on fire. Enveloped in flames, which his Observer, Lt. Gower was unable to subdue, this very gallant soldier succeeded in bringing his aeroplane back to our lines, and though he made a successful landing, the machine collapsed on touching the ground, pinning him beneath wreckage from which he was subsequently rescued. Though suffering extreme torture from burns, Sgt. Mottershead showed the most conspicuous presence of mind in the careful selection of a landing place, and his wonderful endurance and fortitude undoubtedly saved the life of his Observer. He has since succumbed to his injuries."

On Wednesday, 11th April 1917, the Mayor of Widnes held a concert in the Premier Picture House for the "Memorial Fund to the late Sergeant Thomas Mottershead V.C, D.C.M"

The flyer for that concert included a 'TRIBUTE TO "A VERY GALLANT SOLDIER"', by Amanda Bebbington, also published in the "Weekly News" on 16 February 1917.

TRIBUTE TO "A VERY GALLANT SOLDIER"

If I strove to tell this story as such story should be told,
I should write in jewel letters on a leaf of shining gold;
With a diamond pen to shrine each word as crystal as a tear,
And a blood-red fire of rubies to flash the record clear.

Oh! I cannot tell this story, for the flame is in my heart,
And my soul's afire with a vision of the mighty hero-part;
And I spill the diamonds, in tears, that blind my mortal eyes
As I dream the horror of that flight through the unpitying skies.

Oh! A nation's heart beats quicker with a proud exultant glow;
For such deeds as these can thrill her through her agony of woe.
And the England that doth render him her amplest meed of fame
Counts richest jewel in her crown her brave son's honoured name.

I leave the story all untold - too feeble are my words.
The ocean's diapason and the storm wind's thundering chords,
The very stars that strew the heavens, the suns that ceaseless roll
Shall sing and blaze the brighter since they keep that hero-soul.

Written by a lady called Amanda Bebbington, published in the "Weekly News", 16th February 1917. The 1911 Census lists an Amanda Bebbington married to Joseph Henry Bebbington and living in Belvoir Road Widnes, Widnes, Lancashire & Cheshire, England.  They had a daughter called Stella who was born in 1911.   Research from Debbie Cameron regarding Amanda found this: she was born Harriet Elizabeth Amanda Gittings in 1880 in Wednesbury, Staffordshire. She married Joseph Henry Bebbington, an engineer, in 1902. Amanda died in 1927.