Book Review “In the Trenches: Those who were there” by Rachel Bilton (Pen & Sword Military, 2016)

“…you have got to go there…”  Jeremy Bowen, BBC War Correspondent 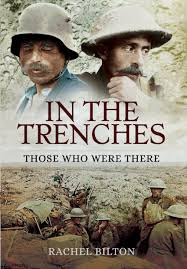 Having read Rachel Bilton’s excellent book “Prisoners & Escape: Those who were there”, I was really looking forward to reading “In the Trenches” by the same author. As far as I’m concerned, it is vital to read reports written by people who experienced the conflict at first hand and in this book, Bilton has compiled seventeen extremely interesting accounts that cover the war on the Western Front, Mesopotamia and Salonika.

The first excerpt in the book, “General for a Day”, is an account by professional soldier A.P.G. Vivian of his adventures in Flanders in the early days of WW1.  Describing his Blighty treatment after being wounded, Vivian mentions Lady Astor: ”One of the most indefatigable workers in the cause of our comfort was Lady Astor, who was affectionately known among us as ‘Nancy’ and to whom I now record my thanks.” (p.18).

I am interested in the poetry of the First World War, so I was pleased to see pieces by two soldier poets/writers included – Herbert Read and Ralph Hale Mottram – both of whom served on the Western Front.

I must admit that although I enjoyed this book, I was disappointed with certain aspects. Like me, academics and purists would probably lament the absence of some sort of formal Bibliography and even the most casual reader might well appreciate a reading list, in case they wanted to read more of the various memoires from which these excerpts were originally taken.

While Bilton has included brief biographies of some of the authors, I could not help wondering why these were left out – Anthony R. Hossack, Mark Severn (who has two excerpts included), Herbert Read and F. Mitchell.   I would also like to have known the original sources of the fantastic photographs included in the centre pages of the book.

In her biography of Charles Douie (“The Authors”, p. ix), Bilton tells us that “After service on the Somme and in Flanders, he was detached from his Battalion and was in Italy when the war finished”.  As the Italian Front was my inspiration for researching the Artists of the First World War*, this has inspired me to try and read Douie’s account of his service on that Front.   I’m researching Africa in WW1 as well as the Eastern Front and Russia – other often forgotten theatres of the conflict –  and the four writers Bilton omitted from her biographies.

“In the Trenches: Those who were there” by Rabel Bilton (Pen & Sword Military, 2016) available from Amazon and all good book stores.  Further information from https://www.pen-and-sword.co.uk/


* On the Western Front, the French victory at the Battle of Malmaison (23rd – 27th October, 1917), gave the Allies hope and control of Le Chemin des Dames.  However, as explained in the book “Our Italian Front”, “…it was a rude shock and bitter disappointment to learn of the Caporetto disaster in Italy. The collapse of the Italian second army had left a great gap in the Allies' line, and through it the Austrians, aided by a number of German divisions, were pouring down from the mountains to the plain.” (Chapter One “Our Italian Front” commentary by Warner Allen, illustrated by Martin Hardie.)

Reinforcements were therefore urgently despatched from the Western Front to the Italian Front. The enemy attack was renewed on 15th June 1918 with Austro-Hungarians troops engaging the Allies during the Battle of Piave. After fierce fighting, Austria asked for an armistice on 29th October 1918 and an armistice was signed on 3rd November at Villa Giusti, near Padua.