Book: 'Rough Riders The City of London Yeomanry during the First World War' by Stuart Latham 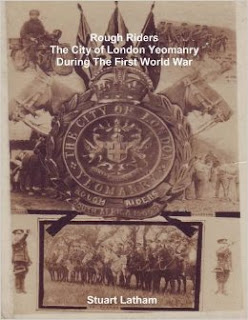 I have just discovered another fascinating book about the First World War.  Stuart Latham's Great-Grandfather, Fred Latham, served with the City of London Yeomanry during the conflict and Stuart has put together a detailed history of the Regiment.

From my point of view, for the 'Fascinating Facts' section of my exhibition project, the first thing I learnt from the book is that the word 'chat' meaning an informal discussion, comes from when soldiers were together to perform the task of killing the lice in their uniforms - 'chat' being the sound made when a lice is popped.  With photographs, anecdotes written by the soldiers of the Regiment and more, this is definitely a 'couldn't put it down' book.

"Rough Riders The City of London Yeomanry during the First World War" by Stuart Latham, published by S and T Marketing Ltd, Swindon.  Further details from enquiries@sandtsales.co.uk
Posted by Lucy at 12:40

Belgian Refugees in the UK during The First World War

I have just found an exciting venture commemorating Belgian Refugees in the First World War. Here is the link to the website
https://refugeesinrhyl.wordpress.com/author/tonivitti/

More than 265,000 refugees came to the UK during WW1.   Many of the records were lost during the Blitz so it is difficult to be certain.  A Belgian Refugee Committee was set up but each area that took in refugees had its own Committee through which help was channelled.

Two of our best known poets of the era - May Sinclair and Beatrix Brice Miller - travelled to France and Belgium in 1914 to help and wrote about what they witnessed.   May's account of serving coffee and "two slices of black bread per person" to over 3,000 people is particularly moving.  As indeed is the account written by Charlotte Kellogg, the only woman member of the Commission for Relief to visit Belgium in July 1916.    According to Charlotte in "Women of Belgium Turning Tragedy into Triumph", there were three million people who were destitute and one quarter of a million dependent for their existence upon soup kitchens.

Bertha (Betty) Stevenson, a YMCA volunteer who was killed in May 1918 during an air raid while working near Etaples, also mentioned Belgian refugees in her diaries which were published after the war by Betty's Mother and Aunt.

The Belgian poet Marguerite Coppin was evacuated to the UK during the First World War.  She stayed on after the war and worked as a French teacher.

Perhaps the most famous of all the Belgian Refugees of WW1 is the fictitious character of Agatha Christie - the detective Hercule Poirot.