Through Derek Walker of the Facebook Group South African War Graves,  I discovered a "Forgotten Poet of the First World War" (Forgotten (male) Poets is another section of the project) - Samuel Edward Krune Mqhayi (1875 - 1945) - South African.  I also learned of the existence of the South African Labour Corps during WW1.

Derek kindly supplied the following information:  "The SANLC are a very neglected part of our military history. Basically volunteers who were employed to do the dirty work and who were not allowed to bear arms. Its a bit of an unsavoury part of our military history, and the loss of the Mendi was a tragedy, I dont have numbers or info on it all, but will see if I can dredge up some interesting reads about them.

They also served in WW2 although I think they were then known as NMC (Native Military Corps), and did a fantastic job wherever they went.

Many thanks indeed Derek.
Posted by Lucy at 07:05 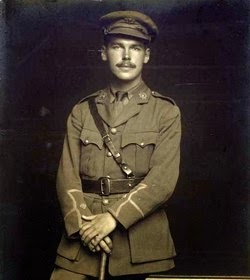 Sir Arthur Connan Doyle was another member of J.M. Barrie's recreational cricket team.   Conan Doyle's son by his first wife Mary Louise, nee Hawkins, was born on 15th November 1892. He was called Arthur Alleyne Kingsley and was known as Kingsley.

Kingsley joined the 1st/2nd Hampshire Regiment, receiving a temporary commission in 1915.  He was wounded at the Battle of the Somme in 1916 and died on 28th October 1918 after contracting influenza.