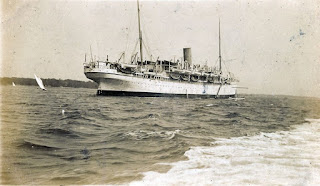 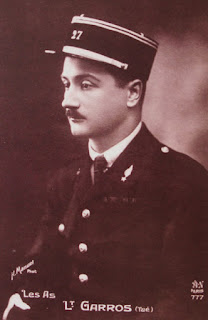 Eugène Adrien Roland Garros was born on 6th October 1888 in Saint-Denis, France.   He obtained his pilot’s licence in July 1910 and in 1913 was the first person to fly non-stop from Fréjus in the south of France across the Mediterranean to Bizerte in Tunisia.


When war broke out, Roland joined the French Army and was credited with having destroyed a German Zeppelin, killing its two pilots, on 3rd August 1914.   Taken prisoner of war in April 1915 when he was forced to land due to a jammed petrol tube, Roland finally managed to escape in February 1918.  He rejoined the French Army and was shot down and killed in September 1918 near Vouziers in the Ardennes.


Roland was a keen sportsman and played tennis at a club in Paris in his spare time.  During the 1920s the Centre was named after him.  Et voilà – Stade Roland Garros
Posted by Lucy at 08:03

An interesting, well-researched documentary was shown about the Battle of Jutland by Channel 4 on Saturday 21st May 2016.  New technology enabled divers to have a close look at the wrecks lying on the bed of the North Sea.   It is hard for us these days to imagine what life was like in WW1 when ordinary folk did not have telephones at home and there was no television or radio (wireless).


During the First World War, Cecil Roberts was a young journalist working for the “Liverpool Echo”.  In early May 1916 Roberts went with a party of other journalists on a “special naval mission” to “see the Navy in its various activities”.  They visited ships, arsenals and building yards around the coast of Britain.   After meeting Vice-Admiral Sir David Beatty on HMS. Lion at Rosyth, they went to Scapa Flow in the Orkney Islands, which Admiral Sir John Jellicoe had decided was the safest harbour for the main British Fleet.  Although Scapa Flow was too far north to protect the east coast from the German bombardments (Scarborough, Whitby and Hartlepool, December 1914), it meant that the German fleet were “bottled up… save for the odd hit-and-run exploit.”


Roberts interviewed Sir John Jellicoe aboard HMS Iron Duke.  As an amateur pianist himself, he asked the Admiral if he played the baby grand piano that was in the Admiral’s cabin. ”Very badly,” replied the Admiral.  With regard to the war, Sir John Jellicoe warned: “The main danger which we have to guard against is that of the Fleet being forced to make false strategic moves owing to some outcry being caused by people who think that unless guns are being fired, or the Fleet is constantly in the vicinity of the enemy coast, the Navy is not doing its work to win the war.”


The British Navy had not seen significant action since the Battle of Trafalgar on 21st October 1805 but warfare had been very different back then when there were no submarines or mines.   Sir John Jellicoe knew that, compared to British ships, the German ships were faster and better equipped with thicker armour plating.  German ships had better range-finders and optical instruments for gunnery.  However, Jellicoe’s warning to the Admiralty of July 1914 about the inferiority of British ships, went unheeded.

According to Roberts, ‘Our shells were inferior… the magazine chambers had dangerous defects, ship design was faulty and our cordite was defective, being unstable at high temperatures’.    Writing in 1968, Roberts added a note with regard to those defects which were the possible cause of the sudden explosions that destroyed Vanguard, Bulwark, Natal, Princess Irene and Glatton.   This would indeed seem to have been the case, for the documentary showed a German ship that, in spite of having been hit 24 times by British shells, was afloat and had to be scuttled with most of her crew still on board to avoid her falling into British hands.

After the Battle, Roberts went to a lot of trouble to try to find out the truth and came to the conclusion that, while the Germans could claim a ‘tactical success’, they “never again dared to challenge the British Fleet”.  Their ships “rotted in the harbours with deteriorating crews” and they were “forced to resort to unrestricted submarine warfare which in turn failed and brought in the U.S.A.”  Roberts felt that Jellicoe was right to urge caution and had the British Fleet engaged the German ships at Jutland, there would have been a far greater loss of life and shipping on both sides.

Why the Laughing Cow laughs and how she got her name

Most people have heard of the Paris taxis drafted in to help during the Battle of the Marne in WW1 but there is another interesting fact relating to Parisian transport.
Once it became clear that the war was going to last, getting supplies of fresh food to the large number of troops in the war zone became a problem.  Until that time, wagons with horses were the main means of taking supplies to troops at the front in wartime.   With the vast numbers of troops involved and the terrain of the Western Front in WW1, it was clear that a more efficient means was required.  And so Parisian buses – motorized transport - were drafted in and modified to take much needed supplies of fresh food to the front.
A special unit was set up to transport fresh meat called in French Ravitaillement de Viande Fraiche and known as RVF.  This organization was divided into sections and each section had their own logo to identify their vehicles. Animals were chosen – a cow, a monkey, stork, dog, goose, etc. - and a competition was held to find the most suitable drawings to be used on each section’s buses.
German supplies of fresh food were transported in motorized vehicles with the insignia “Walkirie” and French Cartoonist Benjamin Rabier won the prize for his drawing for a logo for Section B70 of the RVF.  Rabier decided to parody the German Walkirie emblem which referred to the Valkyries, made famous by Wagner in “The Ride of the Valkyries”.  Rabier drew a parody of the German logo - a laughing cow under the banner “Wachkyrie” which looks remarkably like “vache qui rit”, meaning laughing cow.
The design was accepted by the authorities, on whom the ironic humour was not lost, and it was duly installed on the eight buses of Section B70.
One of the drivers of the eight buses in Section B70 of the RVF was a certain Leon Bel, a cheese maker from Comté in France, who was 36 at the start of WW1. He was assigned to the RVF as a driver.
When Leon Bel started France’s first industrial cheese making concern in 1921, he drew a cartoon representation of a cow to use as a company logo.  However, he wasn’t completely satisfied with his drawing and so he contacted his old friend Benjamin Rabier, who came up with the design we know today – the head of a cow laughing - wearing the now famous round cheese boxes as earrings.
With thanks to the Facebook Group Hommage aux Poilus for bringing this to my attention.
Source:  fr.wikipedia.org/wiki/La_vache_qui_rit
Posted by Lucy at 09:02