The Order of the White Feather in The First World War 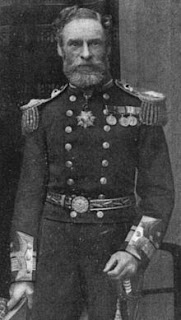 I am reading Dr. Vivien Newman’s book ‘We also served The Forgotten Women of the First World War’ (published by Pen and Sword, Barnsley, 2014).  On page 13, is the story of The White Feather Brigade.  I did not realise that was an official movement called The Order of the White Feather founded in August 1914 by Admiral Charles Cooper-Penrose (1841 – 1921) with the support of the government.  Admiral Cooper-Penrose was helped by the prominent writer Mrs Mary Augusta Humphrey Ward (1851 – 1920).   Starting with a group of 30 women in Folkestone, the idea was to shame men into joining the forces.  According to Dr. Newman, would be adherents had to complete a form, and, if they included stamps to the value of two pence (just over £1 in 2015), they would receive a badge and a place on the Active Service League’s Roll of Honour.  The idea was picked up by the press and quickly spread with special songs being commissioned and written to encourage men to enlist. These were sung by women in music halls.


The original supposition that a white feather represented cowardice appears to come from cock fighting, in which it was believed that a cock with white feathers in his tail would not be a very good fighter.  In America in 1775, an incident occurred in New York when a group of Quakers in a Meeting House were confronted by a hostile group of indigenous Indians.  The Quakers remained silent and the Chief of the Indians, realising the Quakers had no weapons, took a white feather from his quiver and attached it to the door of their church as a sign that the building was to be left alone.
We have been speculating as to where the white feathers would have come from.  Could they have been goose or duck feathers?  At that time people raised geese in their gardens and back yards for Christmas.  If anyone knows more please get in touch and enlighten us. Photo Admiral Charles Cooper Penrose-Fitzgerald.