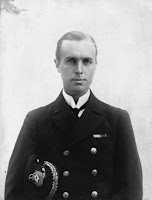 On 19th November 1915, during a raid in Bulgaria, Richard Bell-Davies rescued pilot Fl SLt Gilbert Smylie, who had been shot down near Ferrijik Junction.

Richard swooped down in his plane, landed, grabbed hold of Symlie and hauled him on board his plane to safety, as the Ottomans attacked again.

That was the first ever combat search and rescue operation and Richard Bell-Davies was awarded a Victoria Cross (V.C.) for his action. 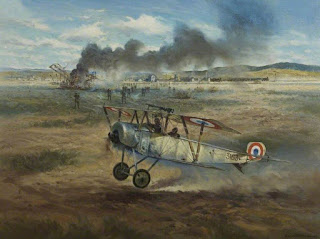 Having read several books about First World War aviators and researched aviator poets for my commemorative exhibitions, I was very keen to find out more about the equipment needed in those early days of flight.  In this book, Mark Hillier has collected the most wonderful information about the uniforms and equipment that aircrew required to stay safely in the skies over the Western Front.

After admiring the front cover photograph, the first thing I discovered was on one of the first inside pages that the Latin motto of Britain’s Royal Air Force – “Per ardua ad astra” (Translation By hard work we reach the stars), which was the motto used by my primary school when I was there – was approved as the motto of the Royal Flying Corps, as the RAF was initially known, by King George V on 15th March 1913, and confirmed by Army Order No. 111”.

As an aside, due to my interest in the role of women in WW1, I was interested to note on page vi that the book is dedicated to the author’s family members, among them Nurse Memie Gwendolin Stephenson, who was a volunteer ambulance driver with the Red Cross.

Although Mark goes into great detail about equipment, he also explains the history of Britain’s military aviators and the background to the formation of the Royal Flying Cops.

In the Introduction I noticed that “keeping warm was not just about creature comforts, but maintaining alertness which meant the odds of surviving increased on long or high-altitude sorties.”  Mark explains that “The focus was on the art of flying, and it was an art form at this time rather than a science.” (pp. viii and ix).

I found the chapters on flying clothing, flying equiment, unforms, rank, badges, insignia and buttons utterly fascinating.  They are chock full of the most wonderful photographs – many of them from Mark’s private collection - information, explanations and contemporary advertisements. “It seems that by August 1917 the RFC had started to adopt some electrically heated clothing.” (p. 93).   It is a real eye-opener to read about the trials and tribulations involved in finding out which clothes, goggles, gloves, helmets and boots, etc. were the best in those early days of flight, which were difficult enough without being shot at, and the research and testing necessary to manufacture them.

There are also chapters on paperwork and documents and on the transition from the Royal Flying Corps to the Royal Air Force.   With appendices, notes and an extensive bibliography, this is a book you will want to refer to again and again.

For further information about this and other wonderful books from Pen & Sword please see their website: https://www.pen-and-sword.co.uk/ 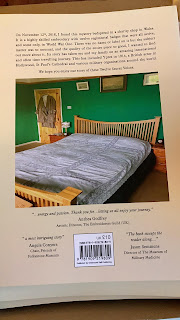 In November 2018, Anne Schuermans was in a charity shop in Wales, UK, rummaging through a bag of white goods, looking for a tablecloth for Christmas Day, when she came across a rather unusual embroidered double bedspread. Anne tells us:  "The bedspread was unusual because the embroidery was not of baskets, seasons, flowers or bonneted ladies. There wasn’t even a bird or bow!  The embroidery was of REGIMENTAL BADGES!   Twelve in total, representing assorted units from seven commonwealth countries!

When my husband Damian and I identified them, another unique fact came to light - they were all active in World War One! Now we were REALLY intrigued!

This amazing bedspread helped us through 2020 by taking us on an international and often time- travelling adventure, including 1914 Ypres, a British actor in Hollywood, an Irish Convent, Chequers (yes - THAT one) and to numerous historic professional organisations.

And all because there is NO clue on it of WHO, WHERE, WHY, WHEN etc. it was made! NOTHING AT ALL!

These questions inspired us to write a book about our adventure and we are pleased that this beautiful article is now in a public collection for all to enjoy.  We have called the book .

AND IT IS NOW AVAILABLE

£10 plus p&p worldwide from

Wow! I will definitely have to get a copy of this! 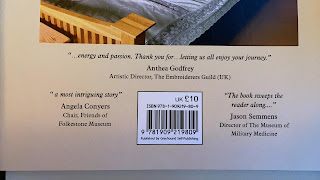