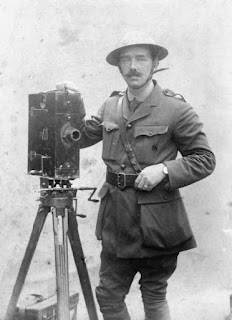 John Benjamin McDowell was born in Plumstead, London, UK on 22nd December 1877.  His parents were George McDowell and his wife Susan, nee Franklin. He had a brother, George, who was born in 1882.

When he was fifteen, John began an apprenticeship as an engineer at Woolwich Arsenal, who manufactured armaments, munitions and explosives.  By 1898 he was working as a cameraman, projectionist and electrician for ‘The  British Mutoscope and Biograph Syndicate’, often showing  Biograph films of the Boer War at the Palace Theatre in London.

John married Emily Ada White in 1900 and the couple lived in Deptford before moving to Willesden. On the 1901 Census, John described  himself a Biograph operator at the Palace Theatre, London.

In early 1908, John went into partnership with a former colleague and formed the ‘British and Colonial Kinematograph Company’ (B & C) producing news, documentaries and short comedies.

When the First World War broke out, John joined the voluntary home defence militia The Volunteer Training Corps. He negotiated for the rights to film the war – he was the signatory for ‘B & C’. In June 1916 after one of the two ‘Official War Office Kinematographers’ who had been authorised to film the allied armies in action in France was invalided home, John volunteered to replace him. While still a civilian, he travelled to the Western Front and worke with the other official cameraman, Geoffrey H. Malins, in the battlefields of the Somme. The officer in charge noted that, during the filming, “Mr McDowell ran considerable risks. I have seen him have very narrow escapes, notably from machine gun-bullets…when trying to cross no man’s land…and several times from shells….he has also been gassed”.

John then worked on several more film productions for the War Office including newsreels and the major films - ‘The Battle of the Ancre and the Advance of the Tanks’ and ‘The German Retreat and The Battle of Arras’.  In April 1918, although still a civilian, he was put in charge of the movements of all the cameramen on the Western Front. In June 1918, both he and Geoffrey Malins were awarded the ‘Medal of the Most Excellent Order of the British Empire’ (known as the ‘BEM’ from 1922) for ‘courage and devotion to duty’. John was then commissioned as a Lieutenant in July 1918 when he was also awarded the ‘Military Cross’ for ‘courage under fire’.

Note:  The Volunteer Training Corps was a voluntary home defence militia in the United Kingdom during the First World War, formed following a demand for a means of service for those men who were over military age or those with business or family commitments which made it difficult for them to volunteer for the armed services. At that stage of the war, Britain had on a voluntary system of enlistment and many men still held to the Victorian principle that it was the task of professional troops to fight a war, while voluntary militias provided for home defence.  Consequently, civilian local defence groups began to spring up spontaneously as soon as war was declared.

The volunteer movement gained publicity from letters and articles in newspapers advocating civilian participation in home defence, with notable proponents being Arthur Conan Doyle and H. G. Wells.  Harold Tennant, Under-Secretary of State for War, realising that the government could do little to prevent them, decided in September 1914 to allow the Central Committee of the London Volunteer Defence Force to continue. Lord Desborough became the President of the Association and General Sir O'Moore Creagh VC was appointed the Military Advisor. In November, the association was officially recognised as the administrative body of the VTC and formally subjected to conditions which prevented interference with recruitment into the regular army, barred members from holding military rank or wearing uniforms other than an armband and denied any state funding. The Volunteer Training Corps was suspended in December 1918, and officially disbanded in January 1920, with the exception of the Volunteer Motor Corps, which was retained until April 1921 in case of civil disorder.

Photographs: John McDowell on the Western Front and

Sources:  Find my Past, Free BMD and

With thanks to Ciaran Conlan for telling us about Frank who was the only composer/musician in the list Ciaran sent me who was not on my list.  If anyone has a photograph of Frank please get in touch 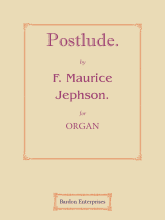 Frank Maurice Jephson was born into a musical family in Derby, Derbyshire, UK, the birth being registered in the first quarter of 1886.  His parents were Thomas Jephson, a coal merchant, and his wife, Emma H. Jephson, nee Raynolds and the family lived in Handel House, Curzon Street, St. Werburgh, Derby, which was built by Frank’s grandfather, John Jephson. Frank’s great grandfather was a music teacher and his great great grandfather was the organist at Alfreton Parish Church in Derbyshire.

Frank initially studied music with Mr S. Neville Cox.  On the 1901 Census - when he was fifteen - Frank is recorded as boarding in Kensington, London, along with John H. Williams, a professor of music from Lincolnshire, with whom Frank also studied music.  Frank’s music teacher, John Williams, was organist and choirmaster of Westbourne Park Baptist Church. In 1902, Frank became Assistant organist of the Westbourne Park Church and at the age of eighteen, Frank obtained his Associateship Diploma (ARCO) from the Royal College of Music – which demonstrates high achievement in organ playing and supporting theoretical work.

In 1904, Frank became the organist of Richmond-upon-Thames Presbyterian Church and in 1910 he married Margaret Kathleen Davis.  The couple lived in Acton, London, before moving to Richmond.

In 1916, Frank joined the 1st/5th Battalion, London Regiment (London Rifle Brigade) as Rifleman No. 303040.  He was posted to France, where, according to a newspaper report, he was apparently commissioned, although I cannot find anything to back that up.  Frank was badly wounded fighting in France on 19th April 1917 and died of his wounds on 20th April 1917.  He was buried in Etaples Military Cemetary, France, Grave reference XIX. E. 5 and is also remembered on St Mary Magdalene Church - WW1 Roll Of Honour (WMR 12510) - in Richmond, now in Greater London, UK.

List of works by F. Maurice Jephson held by the British Library, which (except where noted) are for piano and were published by the London firm Joseph Williams:

Marionettes "A Characteristic Sketch for the Piano" (1912)

Postlude in C minor for Organ (reprinted by Bardic Music, 2002)

"Send back my long stray'd eyes to me" for male voice choir (TTBB) words by John Donne (Joseph Williams, c1930.)

Sources:  Find my Past