Book Review: “Reported Missing in the Great War 100 years of searching for the truth” by John Broom, with a foreword by Paul Reed (Pen & Sword Military, 2020)

“ … over half a million men remained missing upon the signing of the Armistice on 11 November 1918, and searching and exhumation work began in earnest on 21 November, with men volunteering for this grisly work being paid an extra allowance of 2s. 6p.* a day.” P. 30

“The missing continue to remind us of their presence, and the yearning for closure amongst their families remains unabated.”  P. 39. 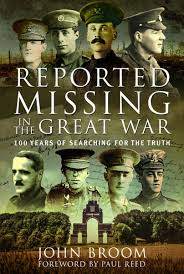 When the First World War broke out, Great Uncle James from Northfleet, Kent, UK, joined the Royal West Kent Regiment. He had been transferred to the Northumberland Fusiliers when he was reported missing on the first day of the Battle of Arras, 9th April 1917 – which was Easter Monday that year.  This book is therefore of particular interest to me, as it goes into great detail about just some of those reported missing, the effect it had on their loved ones and the efforts of their families to find out what happened to them. And I can certainly relate to that "yearning for closure".

Although primarily about the missing of WW1, the book is filled with extremely interesting details – for instance, I discovered a female poet hitherto unknown to me - Emma Backhouse. And for the Fascinating Facts of the Great War section of my WW1 exhibition project, I discovered that two of Emma’s sons – Tom, b. circa 1885, and his brother George Harry, b. circa 1890 - went to live in the United States of America and became naturalised citizens in 1913.  Tom Backhouse joined the American forces in WW1 and was killed in action while serving in the Argonne with the 325 Infantry, 82nd Division of the U.S. Army.  (pp. 36 – 38).   His body was repatriated to Britain because he served with the U.S. Army - which is why he was included in the book.

Another fact I did not know was that, as a conscientious objector in the First World War, the British writer E.M. Forster served as a Chief Searcher (for wounded and missing servicemen) for the British Red Cross in Alexandria, Egypt, from November 1915 until January 1919.  He wrote: “It is depressing in a way, for if one does get news about the missing, it is generally bad news”. p. 2.

On page 62, I discovered some of the artwork done by a soldier artist of WW1 – Frank Mead for the Artists of the First World War section of my project.

In fact, there is so much of interest in this book that I find it very hard to put down!

Even if you are not among those who have family members who were reported missing during the First World War, this is an extremely interesting book and another must read for anyone interested in the history of the First World War.

For further information about this and other publications from Pen & Sword, please visit their website https://www.pen-and-sword.co.uk/