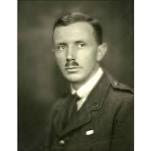 Lawrence Bruce Robertson was born on 6th September 1885 in Toronto, Canada. He was the third son of Alexander James Robertson, a manufacturer’s agent, and hi wife, Julia Dalmage, nee Carry. Educated at the Toronto Model School, Upper Canada College, University College (BA 1907), and the faculty of medicine of the University of Toronto (MB 1909), Lawrence became an intern in surgery at Toronto’s Hospital for Sick Children, of which his uncle John Ross Robertson was board chairman. Lawrence then trained for a year and a half in paediatric and orthopaedic surgery at Bellevue Hospital in New York City, then spent six months as house surgeon at the Children’s Hospital in Boston. In 1913 he returned to Toronto as an assistant in both clinical surgery and pathology at Sick Children’s as well as a demonstrator in clinical surgery at the university.

When war broke out, Lawrence enlisted in November 1914 in the Canadian Expeditionary Force and was commissioned a lieutenant.  He was posted to the hospital at the training camp on the Toronto exhibition grounds. The Canadian Army Medical Corps’s No.2 Casualty Clearing Station was being organized with area officers and medical students from the university so Lawrence enrolled for overseas service and embarked from Halifax with the Unit on 18 April 1915.

Indirect blood transfusion, which Lawrence had learned in New York and applied in Toronto, helped save thousands of patients in military hospitals at the front. Lawrence was the pioneer who introduced the technique to the British army’s medical personnel, and through former colleagues also on military service, to other Canadian hospitals overseas.

Lawrence first applied the technique during the Autumn of 1915, while working at No.14 Canadian General Hospital, on soldiers who had received severe shrapnel wounds. The results were published in the British Medical Journal (London) some months later. His work in 1916 and 1917, most of it with his original unit, No.2 CCS, was reported in other papers. One, in 1917, included an appreciative note by the consulting surgeon to the British Expeditionary Force, Colonel Charles Gordon Watson, who, confident that the methods of transfusion would improve even more “under the stimulus of war,” urged “other surgeons to increased activity in the practice of this life-saving device.” Robertson’s major paper, “A contribution on blood transfusion in war surgery,” was published in Lancet (London) in June 1918.

In October 1917, due to a shortage of surgeons at the Hospital for Sick Children back in Canada, President Sir Robert Alexander Falconer* of the University of Toronto requested that Robertson, who by then was a Major in the CAMC, be sent home. Following his return in February 1918, he resumed his work at Sick Children’s and the university and accepted a posting to the CAMC’s Dominion Orthopaedic Hospital in Toronto. At Sick Children’s, where he was part of a group of brilliant young surgeons which included William Edward Gallie and David Edwin Robertson, he continued his clinical research, using blood transfusion as a treatment for toxemias in children caused, in many instances, by severe burns. In addition, he followed up on two cases of heavy carbon monoxide poisoning in soldiers he had treated at the front in 1916.

Lawrence married Enid Finley, who served with the Volunteer Aid Detachment on 17th April 1920 at Hart House at the university. In early February 1923 he contracted influenza and was hospitalized. Apparently recovered, he returned to his home and family on Foxbar Road, but on 17th he developed pneumonia. A week later, at age 37, Bruce Robertson, soldier and surgeon, died.

Oswald Hope Robertson was born on 2nd June 1886 in Woolwich in south-east London, UK. When he was a baby, his parents went to live in California, settling in the San Joaquin Valley. Oswald attended local schools in Dinuba and the Polytechnic High School in San Francisco.

His plan to study basic biology was changed by a meeting with an American medical student while on holiday in Germany. After attending some lectures on anatomy, he decided to study medicine and enrolled at the University of California in 1906, going on to study at Harvard Medical School, the Massachusetts General Hospital and the Rockefeller Institute for Medical Research.  His studies were curtailed during the First World War when he was called up to join medical teams in France. While working in France,Oswald experimented with preserving human blood cells for use in blood transfusions, and became recognised as the inventor of the blood bank.

When the war ended, Oswald accepted an associate professorship at the Peking Union Medical College in Beijing, China. He became a Full Professor at the institution in 1923. In 1927 he returned to USA, and accepted a position as head of the Department of Medicine at the University of Chicago.

Oswald remained at Chicago until retiring to Emeritus status in 1951. Lawrence then went back to California where he died in Santa Cruz on 23rd March 1966.  His work is commemorated with the Robertson Blood Center, Fort Hood TX.