During the course of my research, I have collected a list of poets, writers, artists and chaplains who were awarded medals for exceptional bravery during the First World War (See Forgotten Poets weblog).   This one I found thanks to a post by The Reverend Nicholas Pye ( @RevdPye), setting me off on a research mission to find out more about Basil Plumptre MC 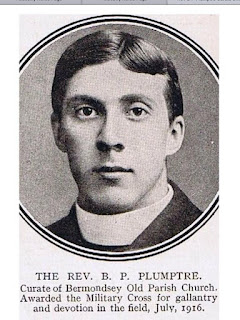 Basil was born in Claypole, Lincolnshire, UK in 1883.  His parents were the Rev. Charles Pemberton Plumptre, an Anglican Church Minister, and his wife Clara, nee Macdonald.

According to the 1891 Census, the family lived in the Vicarage in Woodham Ferris, Eastwood, Nottinghamshire, where The Rev. Charles Plumptre was Rector.   The census records an interesting link to a female WW1 poet -  visitors at that time were Clara’s sister – Mary E. Cornford - with her son Francis M. Cornford (who was born in Eastbourne, Sussex in 1874).  In 1909, Basil’s cousin Francis Cornford (1874 – 1943) married the poet Frances Darwin, who was a daughter of Sir Francis Darwin and Ellen Wordsworth Darwin, née Crofts, and a granddaughter of Charles Darwin.  She is featured on the Female Poets weblog : (https://femalewarpoets.blogspot.com/2020/06/frances-crofts-cornford-1886-1960.html).

Educated at South Eastern Collage Hollicondane, St Lawrence Intra, Thanet, Kent, Basil went on to study Theology at Ridley Hall College, Cambridge.  He was a curate at Bermondsey Old Parish Church when war broke out and he joined the Army Chaplain’s Department.  Seconded to the London Regiment (First Surrey Rifles), he was attached to the 1st/21st Batallion.

Basil was awarded a Military Cross in 1916 for gallantry and devotion in the field. He was killed by a shell on 16th July 1917, and was buried in La Clytte Military Cemetery, Heuvelland, Arrondissement Ieper, West Flanders (West-Vlaanderen), Belgium, Grave Reference: PLOT II. F. 36.

The Reverend Basil Pemberton Plumptre MC is also commemorated on Sevenoaks War Memorial, Kent, where his parents were living at No. 11 South Park, at the time of his death. https://www.findagrave.com/memorial/12686560/basil-pemberton-plumptre

Sources:   Find my Past, Free BMD,