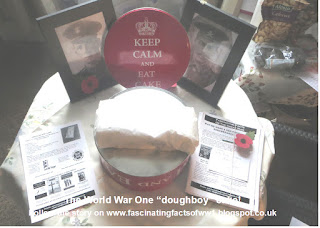 Keith Arden Colley has let me know that the cake arrived in time for Thanksgiving. 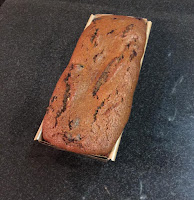 Keith Arden Colley in Texas, USA has a mobile First World War commemorative exhibition which he takes on tour.   During a recent exhibition Keith put some posts on his Facebook page and one of them I found particularly interesting.  It was a WW1 Red Cross cake recipe for a cake to be sent across the Atlantic to the troops of the American Expeditionary Force (AEF), who were known as “Doughboys” because of the shape of their hats.


I decided to make the cake and found it delicious.  Then I had an idea – why not bake a cake and send it back across the Atlantic by surface mail.  In 1917, when America joined WW1 on the side of the Allies, aeroplanes were still something very new, the first recorded flight being in 1903.

Keith thought the idea sounded great so we took some photos of the cake being packed up to send off to Keith and hope to bring you more when the cake reaches Keith.

2 cups brown sugar
2 cups hot water
2 tablespoons of lard (if this is not going by sea you could use an alternative fat)
1 teaspoon each of cinnamon, mixed spice and cloves
8 ozs. Raisins or Craisins – soaked in Rum
1 teaspoon Baking Soda
3 cups of flour


Grease a loaf tin.  Pour the mix into the tin and bake for 45 minutes. 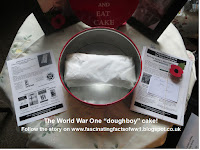 NOTE:  I found it was better to bake the cake at a cooler temperature for longer.


For a fantastic account of the hazards of crossing the Atlantic during 1914 – 1918 see “Into the Danger Zone: Sea Crossings of the First World War” by Tad Fitch and Michael Poirier (The History Press, Stroud, Gloucestershire, UK, 2014).  You will find a review of the book in a previous post on this blog.  Tad and Michael also have a Facebook page:   https://www.facebook.com/intothedangerzone/
Posted by Lucy at 02:41

A few weeks ago I saw a photograph of the grave of Hugh Gordon Langton posted on a commemorative First World War Facebook Group page.   Someone had visited the Poelcapelle British Cemetery in Belgium, noticed Hugh's grave and felt it was unusual.  I just had to find out more.

Gifted violinist Hugh Gordon Langton, was born in London and studied the violin with some of the most famous music professors of the era.  Like his father, Hugh was a Freemason.


Hugh joined the 4th Battalion of the London Regiment during WW1 and was killed during the Battle of Passchendaele on 26th October 1917.   He was buried in Poelcapelle British Cemetery, Langemark-Poelkapelle, West Flanders, Ieper/Ypres, Belgium, Grave Reference: Sp. Mem. 3.   His Commonwealth War Graves Commission headstone is unusual in that it has some musical notes engraved on it.
A note on Hugh's memorial on the Commonwealth War Graves Commission website suggested that the musical notes might have been taken from the popular song "After the Ball", a popular song written in 1891 by Charles K. Harris.  However, it occurred to me that the notes might not come from that tune, as Hugh was a classical musician.  So I asked our talented musician friend David Windle if he could identify them.  David, who is Musical Director of the Tower Circus in Blackpool, Lancashire, UK, told me that, although the tune is similar, the notes are not from "After the Ball".

David researched Hugh’s life story and was moved to compose a piece of music with a violin cadenza in honour of Hugh Gordon Langton.  He has called the piece “Langton’s Theme” - David has written the score which includes a violin cadenza and is hoping it will be performed.  Singer Lynne Fox produced a short video to accompany the music David composed: https://www.youtube.com/watch?v=3iOho4c_bJg&feature=player_embedded


The local brass Band at Harelbeke near the cemetery in Belgium have also composed a piece of music which they play every year at Hugh’s graveside. 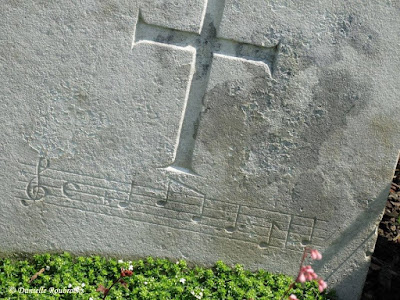 For further information about David's composition, please contact David Windle on circus2016@outlook.com
Here is a painting of a WW1 violinist in uniform, painted by the Scottish artist William Bernard Reid (1879–1961) - it is signed and dated 1916. 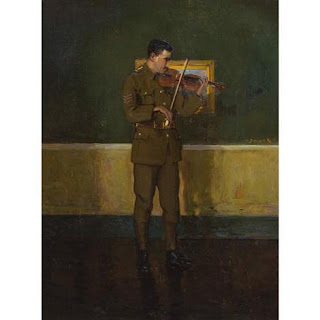 REVIEW OF “PHOTOGRAPHING THE FALLEN: A WAR GRAVES PHOTOGRAPHER ON THE WESTERN FRONT” by Jeremy Gordon-Smith published by Pen & Sword, Barnsley, Yorkshire, UK in 2017 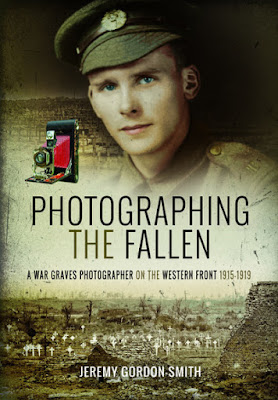 Jeremy Gordon-Smith has edited photographs taken by his Great-Uncle, Ivan Bawtree, who worked for the Kodak Company and who became an official photographer of war graves on the Western Front during the First World War.  Ivan worked for a special Graves Registration Unit set up during WW1 when “it was decided that each soldier, regardless of rank, should be given an individual burial with a wooden cross, later to be replaced with a headstone” (pp.13-14).  The Unit worked continuously, dangerously close to the Front Line, and in all sorts of conditions, taking photographs of the graves and cemeteries.  The photographs were developed onto glass plate negatives – fortunately Ivan made two copies – one of which he kept.  Jeremy’s father rescued the plates after Ivan’s death.   The result is an amazing book which, to my mind, is required reading for anyone visiting the cemeteries of the Western Front or anyone who had a relative killed during WW1.


Jeremy takes us on a journey of discovery from the early days of the setting up of the Imperial War Graves Commission (now known as the Commonwealth War Graves Commission) to the end of the Commission’s work on WW1 graves and cemeteries on the Western Front, which was, ironically, completed in 1938.  Also included are extracts from Ivan’s diaries and an account of the personal story of Ivan’s life up to his death in 1979 and, at one stage, he worked as an Orderly at the Field Hospital next to Lijssenthoek Military Cemetery.


Ivan’s work with the Graves Registration Unit was vital for morale, as it gave those people who were unable to visit the graves of relatives who had been killed or died. “His job facilitated a way for families to mourn their loves ones who had lost their lives in the line of duty.   His work provided relatives with something tangible of what remained of their loved one;  a window they could not otherwise have had… (p. 117).  Many of the photographs in the book remind us of those who came from far away to help the Allied cause – Australians, Canadians and the grave of Li Hung Ching, a Chinese Labour Corps worker who died on 21st January 1918 (p.218)


I particularly liked the way Jeremy has blended some of Ivan’s WW1 sepia photographs – which are amazingly clear - with recent photographs he took while re-visiting Ivan’s old haunts on the Western Front.  One photograph, taken on Whit Monday at Ypres during a sports day, shows an orchestra that  “consisted of a party of German prisoners and escort.  The prisoners performed with violins made by themselves out of cigar boxes, etc. They did very well.” (p.254).


I found this book extremely moving and it is surely a wonderful memorial to the work of Ivan and his fellow members of the Registration Unit but also to all those who were killed or died on the Western Front during WW1.


"Photographing the Fallen:  A War Graves Photographer on the Western Front 1915 – 1919” (Pen & Sword, Barnsley, 2017) £25.  For further information about this book or to find out about other Pen & Sword publications, please see www.pen-and-sword.co.uk or e-mail enquiries@pen-and-sword.co.uk and/or