Review: “The Daily Telegraph Dictionary of Tommies’ Songs and Slang 1914 – 1918” by John Brophy and Eric Partridge with an Introduction by Malcolm Brown

“We who have survived are not, in many ways, the same people that we were”  John Brophy, p. 9. 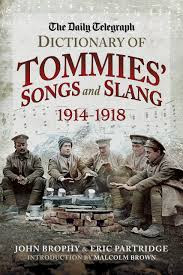 This book is perfect if you are in isolation during the COVID-19 outbreak, bored stiff and looking for something to read. Who can not identify with this sentiment at this time:  “The War was a war not only of physical endurance but of nervous and moral endurance” P. 13.   To my mind, reading this book is a terrific morale booster during these difficult times – at least we are not up to our necks in filthy water, covered in lice and being shot at by artillery fire, rifle fire and machine gun fire at short range.” pp 25 – 26.   Brophy reminds us that “…first a hundred thousand, then a million, eventually several million civilians were hurridly passed to be transformed into soldiers.” P. 14.

The book was first published in 1930 - the two editors had both served on the Western Front during the First World War – and they wanted to record the songs sung by ordinary British soldiers before they were forgotten.   Fifty years on the book was re-published with a Introduction looking back over the intervening years by John Brophy, which is included in this edition.

From my point of view, as a researcher of verse and poetry of the First World War, it is a shame that none of the songs included give any clue as to the identity of the writer(s). “… they came from the ranks, especially from the private soldiers without ambition to bear office or special responsibility.” p. vii

The songs, the lyrics to which composed by ‘ordinary’ soldiers’, were sung to existing tunes – many of them popular music hall songs; they are divided into seven categories – 1. Satire on War and Mock Heroics; 2. Satire on the Military System.  3. Satire on Superior Officers; 4. Paneggrics of Civilian Bliss Past and Present; 5. Celebration of Drink and Other Comforts; 6. Nonsense and Burlesque.  7. Sex and Ribaldry.

With regrd to ribaldry, it may amuse some readers to note that, as editor Brophy kept in some of the coarse language to be found in the songs but removed two of the most vulgar terms used “…in the 1914-18 Army” (p. 22), replacing them with asterisks – I’m guessing that he did not realise that at least one of those words is an acronym.   On the other hand, if you are used to warnings on television programes made during the 1980s that they ‘may contain strong language and scenes of violence’ then perhaps you too will be shocked by the use of these words.

Immediately after the songs you will find a comprehensive alphabetical Glossary of the slang terms used by the troops during the First World War, followed by an Afterword with Bibliographical notes

I was fascinated to learn that the term “Tommy” to describe a British soldier was dismissed by Brophy and Partridge as “never used by English troops except derisively or when imitating the style of a newspaper or a charitable old lady”, though they admitted that it was used by Australians and New Zealanders.” P. 238.  The Imperial War Museum suggests the origin of the   use of Tommy Atkins to describe a British soldier is disputed. One theory says it originated with the Duke of Wellington who used it in 1843; another says the Imperial War Office established it in 1845 — a sort of British "John Doe!!

And, while I knew that radio was in use during WW1 for “sending telegraphic messges only, by long and short ‘buzzes’, and there was no amplification by loud speaker at the receiving end”, a generation proficient in the use of the Internet may not. (pp. 16 – 17).

Altogether an extremely entertaining and enlightening book – I urge you to read it.  “The Daily Telegraph Dictionary of Tommies’ Songs and Slang 1914 – 1918” by John Brophy and Eric Partridge with an Introduction by Malcolm Brown (Frontline Books, an imprint of Pen and Sword Books, Ltd., Barnsley, 2019).  For further information please see the Pen & Sword Website https://penandswordbooks.com/ or Facebook Page https://www.facebook.com/penandswordbooks/