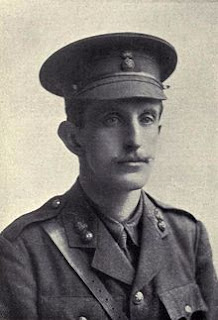 I have just been reading Anne Powell’s delightful book “Gardens Behind the Lines, 1914 – 1918” and there I read:

“… I suddenly came upon young Gladstone’s grave, in the corner of an orchard railed off, where he lies with about fifty men of different regiments… it’s curious to think of him there and his grandfather in Westminster Abbey.”  (p. 12).


Anne quotes from a letter home written in 1915 by Alexander Douglas Gillespie, a 2nd Lieutenant in the Argyll and Sutherland Highlanders who was an enthusiastic gardener.
I  had to find out more, so I looked up Gladstone and it seems that Gillespie was referring to William Glynne Charles Gladstone, 14th July 1885 – 13th April 1915, who was a Grandson of the former Prime Minister of Britain – Liverpool-born William Ewart Gladstone (1809 – 1898).


William Glynne’s parents were the former PM’s eldest son, William Henry Gladstone, and his wife, The Hon. Gertrude Gladstone, daughter of Charles Stuart, 12th Lord Blantyre.  “Young Gladstone” was the last of the Gladstone dynasty to sit in the House of Commons.  He was made Lord Lieutenant of Flintshire in Wales on 8th July 1911.


In WW1 William Glynne Charles Gladstone was commissioned into the Royal Welch Fusiliers as a 2nd Lieutenant.  He was promoted to Lieutenant on 7th April 1915 and posted to France where he was killed on 13th April 1915 near Laventie.   His was the last body to be officially repatriated during the First World War and he was re-buried in St. Deiniol’s, Hawarden, Flintshire, Wales.   His cousin, William Herbert Gladstone, MC, son of the former PM’s second son, The Rev. Stephen Edward Gladstone and his wife Annie Gladstone, was killed in 1918.


“Gardens Behind the Lines, 1914 – 1918 Gardens Found and Made on the Western and Eastern Fronts” by Anne Powell, edited by Jean Moorcroft Wilson and published in “The War Poets” Series by Cecil Woolf, London in 2015.
Posted by Lucy at 04:46