Christmas in Britain during the First World War 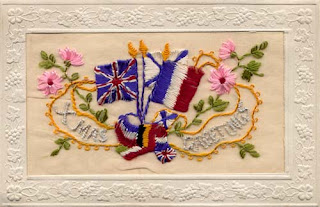 A very interesting article in today's 'Times' newspaper tells us a lot about Christmas in Britain in 1915.  It was the second Christmastide of the conflict that most people had believed would have been 'all be over by Christmas 1914'.

Whilst Christmas 1915 was 'shorn of some of its old meanings' such as peace on earth and goodwill to all men, 'there are signs that to some extent, at any rate, its material associations will be preserved.'

The shops were full of British made toys, rather than the usual German ones - 'military and naval toys - soldiers, forts, warships, guns, and the rest' seem to have been the most popular.  However, for those who could not afford such luxuries, 'at the other end of the social scale is the penny toy, usually to be found in the trays of the kerbstone vendors of Ludgate Hill' (in London).  That year, both sellers and the goods on offer were fewer than in previous years.

Food, however, was apparently plentiful that year: 'Prices for turkeys, geese and beef are high, but both the supply and the demand are good.'  And for those with a sweet tooth, the Port of London Authority (for London was a premier port in those days) reported that 'vessels have come into the Thames with 80,000 to 100,000 packages of Greek currents.  Spain is keeping us well supplied with nuts.  France is sending us, among other things, mistletoe…'