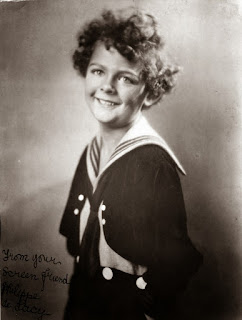 When the war ended, Edith adopted Philippe and took him to America, where he began a career as a child model.   He was discovered by a Hollywood talent scout and appeared in his first film when he was four years old.

Through a mutual friend, Barry Allen sent me the following up-date: "Lucy has the basic facts about Philippe correct. IMDB has him in 38 films and lists them. The number you quoted is proably beause he was not crditited for some films and some were shorts and may have not been counted.

Philippe had a very long career with J. Walter Thompson’s advertising agency. He has a listing for two WWII documentaries – “Yorktown” and “The Fighting Lad” -  as an editorial assistant. His childhood story was the subject of a fictional children's book “LITTLE PHILIPPE OF BELGIUM”, by Madeline Brandeis as part of her "Children of the World " series."

Thank you Stephen and Barry.