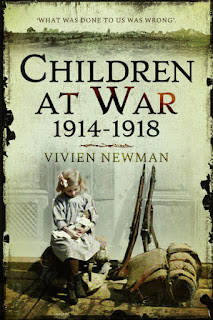 Each year, as we near Remembrance Sunday and 11th November, we hear a great deal about the soldiers of WW1 and, occasionally, about the women who also served but I don’t remember hearing anything about the experiences of those who were children at that time, so this book is a very welcome addition to my WW1 collection.

I grew up knowing quite a bit about WW1 because my mother was four years old when her father, a professional soldier, marched away to Belgium in August 1914.  Among other things, Mother, who lived with her Mother and baby brother in south London, remembered seeing a Zeppelin burn and the aftermath of the Silvertown Munitions Factory explosion. She often spoke about her experiences during the First World War, which left a lasting impression on her. Apart from Grandmother’s struggles to keep things together with two young children, two of Mother’s Uncles lost their lives and, although Grandfather returned home, life was never the same.

Through my research for an exhibition of poetry written by schoolchildren, I knew about French and Belgian children who were orphaned during WW1 - the film “Hugo” highlights that rather well.  I also knew of the involvement of British children in the war effort and about the children of Upper North Street School in Poplar, London who were killed during a German Gotha bombing raid on 13th June 1917. However I did not realise the extent to which children from other countries were involved in WW1 until I began reading Dr. Newman’s book.

Drawing on an impressive list of resources, much of which she translated herself, Newman explores how the first global conflict affected children and young people, many of whom left diaries and accounts of what they experienced.  I did not realise there were so many children and young people on board the British Royal Mail and passenger liner  “Lusitania” when she was torpedoed and sunk.  Those accounts are particularly heart-breaking, as are the accounts of those who were killed, badly injured and/or rendered homeless during the devastating explosion that took place at the munitions factory in Silvertown.

I found a great deal in this book about which I was unaware – I was particularly interested to read accounts written by German children of what life was like for them.  All in all this is an excellent book which should be required reading in schools.

Dr Newman has written several other fantastic WW1-themed books – you can find out more about them on the Pen & Sword website: https://www.pen-and-sword.co.uk/