The Chinese Labour Corps was set up by the British Government in 1916.   Field Marshal Sir Douglas Haigh asked for a force of 21,000 labourers to be recruited in order to free the soldiers for fighting.

The idea was that these labourers would carry out the manual work behind the lines previously carried out by soldiers.  Exceptionally heavy casualties in the early days of the War made those in command realise that something had to be done.  China did not join in the conflict at first, although they later declared war against Germany and the Austro-Hungarian Empire (14th August 1917).   The French Government came up with the idea of recruiting manpower from China and in July 1916 the first group arrived in Marseilles en route for the Western Front. 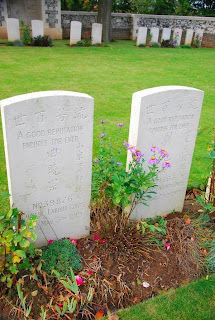 The British Government picked up on the idea and so the Chinese Labour Corps came into being. In all more than 140,000 men served in the CLC before it was disbanded.   Many of the men died in France and are buried there in graves cared for by the Commonwealth War Graves Commission who have produced a pamphlet about the sacrifices made by the workers of the Chinese Labour Corps during World War One.