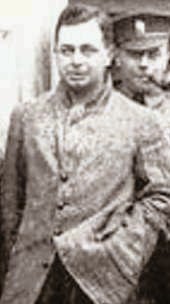 If you scroll down the posts for a while, you will come across one entitled "The Birth of Jingoism" illustrated by a very famous WW1 poster - "Your Country Needs YOU".  The drawing for the poster was done by Alfred Leete.

Alfred Ambrose Chew Leete was born in Northamptonshire on 28th August 1882.  His parents were John Leete, a farmer, and his wife Harriet.   When John Leete's health failed, the family moved to Weston-super-Mare in Somerset where John and Harriet ran a boarding house.

Alfred was educated at Kingsholme School in Weston-super-Mare and then went to Weston College of Science and Art.  After college, Alfred went to London where he began work as an artist for Caxton Advertising Company.

His work was published in the newspaper "The Daily Graphic" and in magazines "Punch", "Tatler & Bystander" and "Strand Magazine".  In 1914 he created a series called "Schmidt the Spy" which was published in "London Opinion" and turned into a film in 1916.

Alfred Leete's design for the front cover of the magazine "London Opinion", which was published on 5th September 1914, became the most famous WW1 poster in the world.

During the First World War, Leete joined the Artists' Rifles and was an instructor with the 2nd Battalion and later served in France.

After the war, Leete continued his work, published several books and designed many famous posters and worked on advertising campaigns for well-known companies.  He died in Kensington, London on 17th June 1933.