Book Review: "Into the Danger Zone Sea Crossings of the First World War" 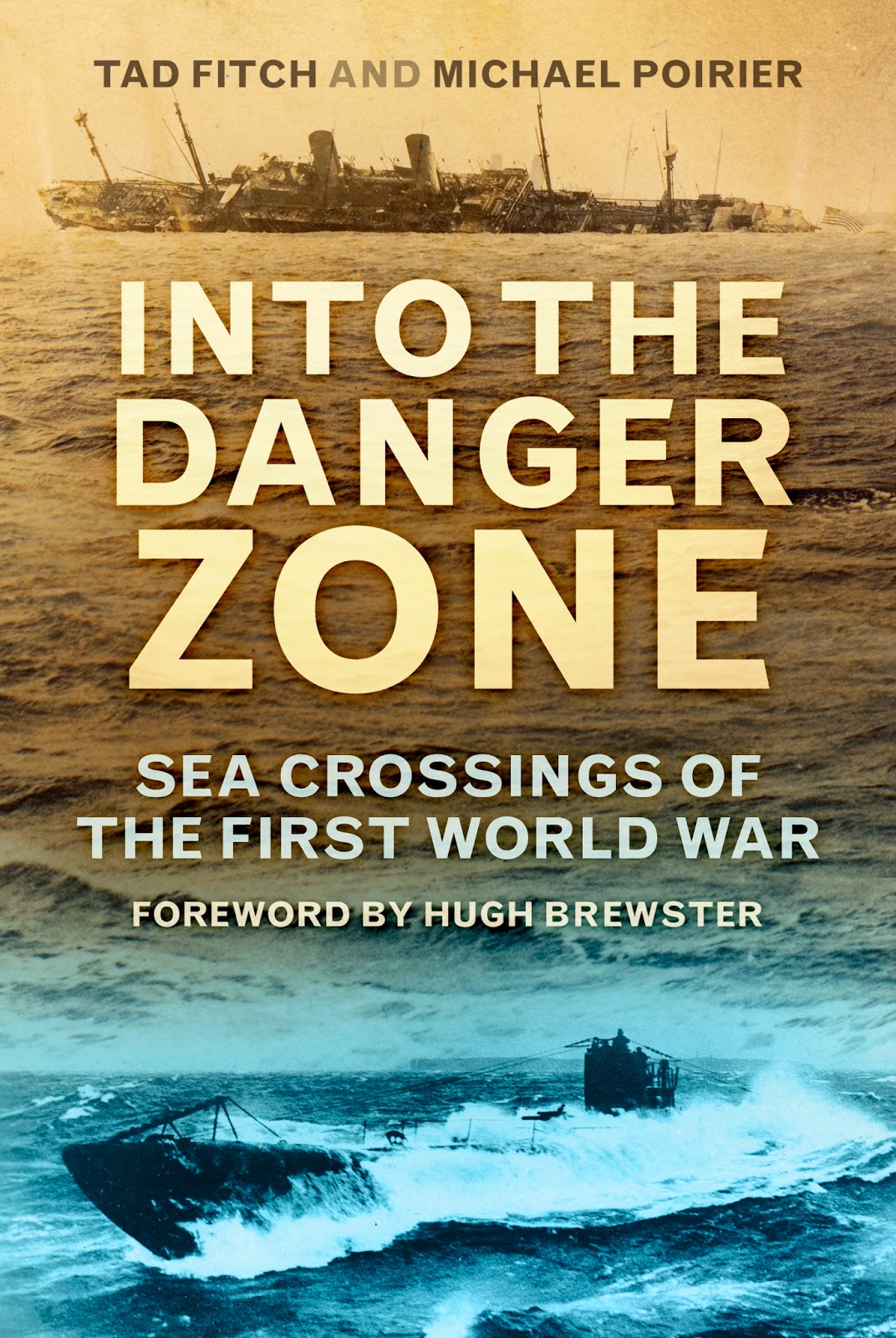 Review of "Into the Danger Zone Sea Crossings of the First World War" by Tad Fitch and Michael Poirier published by The History Press, Stroud, Gloucestershire, 2014.

"Go wild in Brazil" screamed the headline in the holiday supplement of the newspaper on the first weekend of  2015.    Travel is so easy these days and more affordable than it was in the early part of the 20th Century, when travel to somewhere on the other side of the world to where you lived was just for the very rich.  And yet many people did undertake those journeys to answer the call of their Motherland during the First World War.   With the advent of submarine warfare and mines, sea travel, however, was hazardous and it was the only way to go as air passenger travel was in its infancy.

"Into the Danger Zone Sea Crossings of the First World War" is the only book I have found which is full of details about those hazardous sea journeys.  I was absolutely thrilled to find out it was in preparation and couldn't wait to get a copy as it really does answer many of the questions I had during the course of my research into the role of women during WW1. I was particularly  interested in knowing of the journey women like the poet Ella Wheeler Wilcox and the entertainer Elsie Janis would have made to reach the Western Front where they entertained American troops and this book has the answers.

But "Into the Danger Zone" is not just a book about shipping in WW1.  I love the way the book gives a step-by-step chronicle of the events from the assassination of Archduke Ferdinand and his wife Sophie in June 1914 to the signing of the Treaty of Versailles in Paris in June 1919 and beyond.  There are maps and photographs of the ships, U-boats and their passengers and crew and quotes from letters written by survivors and indeed before sailing by those who perished.  I particularly like the photographs of the ships, having been brought up near Liverpool in England at a time when beautiful liners were still regular visitors to the port.

The Cunard Liner RMS Carpathia is one of the many ships featured that stood out for me because one of the Female Poets of the First World War featured in my exhibition project is American poet Moina Belle Michael. Moina was the person who got us all wearing poppies in remembrance of the conflict in 1919. She was on a teaching tour of Italy when war broke out in 1914 but managed to secure a safe passage home to America on the RMS Carpathia, which was the ship that rescued survivors from RMS Titanic when she hit an iceberg and sank in 1912.  Many passenger liners of the era were pressed into service as troopships or hospital ships.  Carpathia served as a troopship during WW1 but was again a passenger ship when she was torpedoed on 17th July 1918 (pp.366 - 370).

With a foreword by Hugh Brewster, author, "Into the Danger Zone" is full of eye-witness accounts of the sinking of many passenger ships, troopships and hospital ships during WW1 and illustrated with photographs from the impressive private collection of the authors.  It is a large book with over 400 pages packed with fascinating details and statistics that take us through the early days of WW1, when ships going to America were full but those going to Europe were almost empty, and finishing with an Epilogue chapter about 1919, when the American and Canadian troops returned across the Atlantic.   A photograph on page 367 shows us what conditions were like for the troops who crossed the Atlantic in WW1.