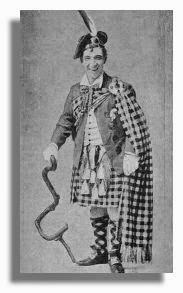 Born on 4th August 1870 in Edinburgh, eldest of seven children, Harry's parents were John Lauder, a master potter and his wife Isabella Urquart Macleod nee Maclennan.  The family moved to Derbyshire in 1882 where John Lauder was going to design china.  However, he died on 20th April and they had to move to Isabella's parents' home in Arbroath.

Harry Lauder left school at the age of 11 and went to work in a flax mill.  The family then moved to Hamilton where Harry worked in a coal mine.  In 1891 he married Ann Vallance, daughter of the manager of the coal mine.

Harry's fellow-workers, who whom he often sang, encouraged him to sing in local music halls.  He joined a concert party and began touring, which enabled him to give up his job at the coal mine.  By 1894 Harry had turned professional and was singing in London venues.

Harry began writing and publishing songs and successful roles in pantomimes ensured his British and international success and he toured America as well as Australia, becoming one of the highest paid entertainers in the world at that time. He was the star of the Royal Command Performance Variety Show in 1912 in front of King George V.

When war broke out in 1914, Harry was in Australia on one of his tours.  He returned home and began to raise money for the war effort and organised recruiting concert tours.  He also took his piano to the Western Front to entertain the troops.  He set up a charity called the Harry Lauder Million Pound Fund to raise money for seriously wounded Scottish servicemen.

For his many services to the war effort, Harry was knighted in 1919.   Lady Lauder died in July 1927 and Harry continued to tour, sing and write songs.  He retired in 1935.  Apart from his songs, Harry also wrote several books and appeared in several films.   He came out of retrieved in the Second World War, entertained troops in Britain and also took part in radio broadcasts.

"Keep right on till the end of the road" is used by Birmingham Football Club as their anthem.