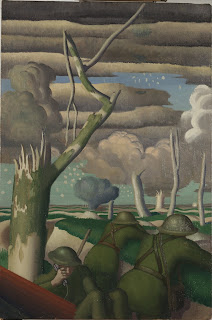 Colin Unwin Gill was born in Bexleyheath, south-east London on 12th May 1892, the eldest of three sons born to George Joseph Gill, a civil servant with the Metropolitan Water Board, and his wife Sarah Sharey Gill, nee Driver.

Colin studied art at the Slade Art School in London and in 1913 won a scholarship to the British School in Rome.  He joined the Royal Garrison Artillery as Second Lieutenant in WW1 and served on the Western Front.


Seconded to the Royal Engineers as a Camouflage Officer, he was invalided back to Britain in March 1918 due to gas poisoning.   After recuperation on the Isle of Wight, Colin returned to the Western Front as an official war artist.


After the war, he returned to Rome to finish his studies.  Colin painted murals and portraits but is perhaps best remembered for his WW1 work.  He died in South Africa while working on an assignment on 16th November 1940.


Gunnery Officers correcting their Battery fire by field telephone from a disused trench in No Man's Land.

Sources:  Wikipedia and "Images of the Great War" by Lawrence Dunn, published by Austin Macaulay Publisher, London, 2015.
Posted by Lucy at 02:09