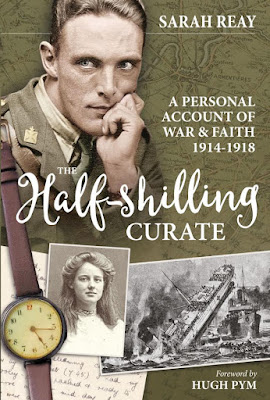 “…the chap who has got religion is a damned lucky chap” ( p. xvii).

The title of the book refers to the way in which Wesleyan Church Minister The Reverend Captain Herbert B. Cowl, MC signed his letters home to his parents, i.e.:  “From your loving son, ‘The Half-Shilling Curate’, Herbert” (p. 20).

I found this book enthralling.  Although it is a personal account, mainly of Herbert’s experiences in the trenches during the conflict, there is a wealth of background information about the First World War - which I found very interesting.  I don’t want to give too much away because I really want you to read this inspiring book but here are just a few of the things that I found of special interest:

When it came to military service, men in Holy Orders or regular Ministers of any denomination were exempt, which makes Herbert’s story and how he, as a non-combatant, came to be awarded a Military Cross, all the more impressive.

Herbert was educated at Hertford Grammar School at the same time as W.E. Johns (“Biggles” creator). Herbert’s sister, Muriel Trehane, was a WW1 VAD;  Herbert had a great love of poetry and was a friend of the poet Walter de la Mare. When Herbert first met his future wife, he had to ask for permission to write to her, which would seem to indicate that   “…the decay of parental authority in the home” (p. 28) was surely only just beginning.

Dr Philip Gosse, son of the WW1 poet Edmund Gosse, was the reason I included the heading ‘Fascinating Facts of the First World War’ in my commemorative exhibition project, so I was really pleased to find Gosse mentioned on several occasions.  Dr. Gosse was present when Herbert was seriously wounded by a piece of shell, as Herbert and Gosse shared accommodation in a cellar of the Advanced Dressing Station where Philip Gosse was based.   I can see why they became friends because they were both keen naturalists.

I was also interested to read that “Despite the decrease in the active numbers of worshippers, Christianity still under-pinned society” at the time of WW1 (p. 42).

Herbert mentions the power of prayer, in which I am a firm believer, asking his family to pray for him – “That kind of moral bias, and spiritual influence, which comes from other’s prayers, means so much to a man …” ( p. 27)

During the early days of WW1, General Sir Douglas Haig said:  We must have large minded, sympathetic men as parsons, who realise the Great Cause for which we are fighting, and can imbue their hearers with enthusiasm” (p. 44).

I don’t think I have seen a photograph of the uniform of a chaplain before – they had black buttons, badges and belt - there is a lovely photograph of the Rev. Captain H.B. Cowl taken in Bristol in December 1914 on page 56.

The description of Soldiers’ Homes at army camps that provided leisure activities on p. 46 I also found interesting.

I did not realise there were ‘rivalries between the churches’ or that soldiers’ dog tags mentioned their religious affiliations, (p. 11).

This book is really beautiful – a delight to read, hard back with glossy paper and illustrated throughout with a great many of the author’s photographs from the family album.  I also very much enjoyed the two sections at the back of the book:  “Herbert’s Roll of Honour”, which has biographies of some of the people mentioned in the book, and “Fond Memories” – testimonials about Herbert from some of the people who knew him and whose lives he touched.  Also included are a bibliography and index.

Herbert’s unshakable belief in God shines forth throughout the book and I was moved to tears several times by his faith, as well as by his bravery.  It is wonderful to think that his message of faith taken to the trenches of the Western Front 100 years ago is being passed on to future generations.  Sarah Reay has done a magnificent job writing this book which is a fitting tribute to her wonderful Grandfather, The Reverend Herbert Cowl, MC.  Credit must also go to Sarah’s late Father, Michael, who had the foresight to keep hold of his Father’s letters, papers, diaries and photographs.  Alas, when my beloved Grandpa died when I was very small, my Uncle threw away all the documents, papers photographs and medals that had belonged to my ‘Old Contemptible’ Grandfather.