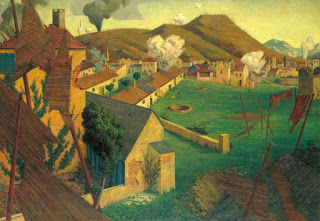 With grateful thanks to Sergio Sbalchiero for finding and posting this painting by Seabrooke and for telling me about Seabrooke’s WW1 service with the Red Cross in Italy.

Ransome Elliott Seabrooke was born on 31st May 1886 in Upton Park, London, UK and was baptised on 3rd July 1886.  His parents were Robert Elliott Seabrooke, a warehouse Superintendent, and his wife Harriet Elizabeth, nee Ransom. The Seabrookes also had a daughter, Winifred Elliott Seabrooke, who was born in 1889.   Elliott studied at the Slade School of Fine Art in London from 1906-1911. Among his teachers was Henry Tonks.  Elliott then rented a shack in England’s Lake District and adapted it for use as a studio. 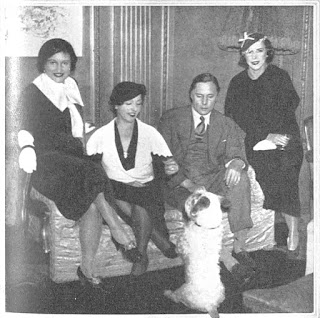 During the First World War, Elliott, who was a pacifist, volunteered to join the British Red Cross and served on the Italian Front.  While in Italy, he became an official war artist.

Elliot was tall and handsome and had a fine singing voice.  He became an actor and performed in films and in plays on stage and on the wireless with other contemporary actors and actresses - John Gielgud, Lewis Casson, Sybil Thorndike, Wendy Hiller, Charles Laughton and Ralph Richardson. 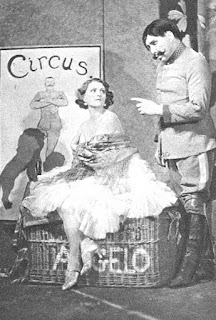 Painting:  Elliott Seabrooke "The Bombardment of Gorizia 21 August 1917".  The view was from the building that housed the First British Red Cross Unit in Gorizia, Italy on the Italian Front in The First World War.

Photograph of Eilliott in the play "The Lion Tamer or English as she is Eaten", an English version by Charles N. Spencer of Alfred Savior's play "Le Dompteur" at the Gate Theatre Studio, London.

Photograph of Elliott and Adolphine seated on the sofa at a reception in London given by Lady Latham (seated on the left) in honour of Elliott's exhibition at Tooth's Galleries in London.  Madame Alanova is on the right of the photograph.   Photo from "The Tatler" magazine, 9th June 1932.
Posted by Lucy at 07:33