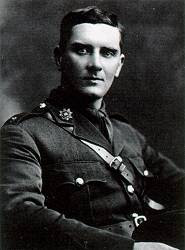 Ernest was born in Lewisham, London, UK.  His father, Charles Druce Farrar, was an Anglican clergyman who became Vicar of Mickefield, Tadcaster, Yorkshire in 1887.  Ernest’s mother was Rose Alice Farrar, nee Handyside, originally from Wales.  Ernest had the following siblings: Ethel Rose, b. 1883 and Cecil Francis, b. 1889.   Educated at Leeds Grammar School, he studied the organ and in May 1905 was awarded a scholarship to study at the Royal College of Music. Ernest studied under Sir Charles Villiers Stanford and Sir Walter Parratt.   After studying, Ernest worked as an organist in Yorkshire.

Ernest married Olive Mason in South Shields in 1913.  In 1915, Ernest joined the Grendier Guards. He was commissioned as a Second Lieutenant into the 3rd Battalion of the Devonshire Regiment on 27th February 1918.  During home leave in the summer of 1918, Ernest conducted the premiere of his final work, "Heroic Elegy", which was dedicated to fallen comrades.

Ernest was killed on the Western Front during the Battle of Epehy Ronssoy, near Le Cateau in the Somme Valley, west of Cambrai, on 18th Spetember 1918, having returned to the Western Front just two days previously.  He was buried in Ronssoy Communal Cemetery, Ronssoy, Departement de la Somme, Picardie, France - Grave/Memorial Reference: 9679560

Photo from Bobb Edwards on https://www.findagrave.com/memorial/9679560