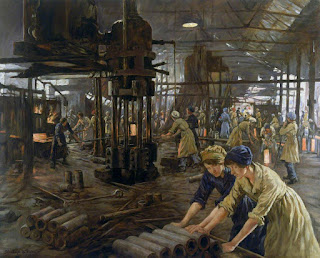 Stanhope was born in Dublin, Ireland on 18th November 1857.  His parents were William Forbes and Juliette de Guise Forbes, who was French. Stanhope’s father was British and he worked as a railway manager in Dublin before being transferred to London. Stanhope had an older brother, William, b. 1857, who became railway manager for the London, Brighton, and South Coast Railway.

Educated at Dulwich College in South London, where he was a boarder, Stanhope studied art under John Sparkes. At that time, Alexander’s father was working for the Luxembourg Railway and, as his son was not well, he took him away from Dulwich College and allowed him to study with private teachers in Brussels. When the Franco-Prussian War ended in 1871, the Forbes family returned to London. John Sparkes helped influence William Forbes to recognise his son's artistic talent and Stanhope was sent to study at the Lambeth School of Art (now called The City and Guilds of London Art School). By 1878 he was at the Royal Academy, studying under Sir Frederic Leighton and Sir John Millais. Fellow students at the academy at that time included Arthur Hacker, Henry Herbert La Thangue and Solomon J. Solomon.

In 1889, Stanhope married a fellow artist - Elizabeth Adèla Armstrong, who was born in Canada - in St. Peter's Church in Newlyn, Cornwall. The couple lived in the "Cliffs Castle" cottage, Newlyn, which overlooked the sea. They had a son named Alexander, who was born in 1894 and was known as Alec. They had a house built in Higher Faughan, Penzance. The Newlyn Art School was founded in 1899.

During the First World War, Stanhope's son Alec served in the Duke of Cornwall's Light Infantry and was killed during The Somme Offensive in 1916.  He was buried in Guillemont Road Cemetery, where his headstone bears an inscription composed by his father: “HE SAW BEYOND THE FILTH OF BATTLE, AND THOUGHT DEATH A FAIR PRICE TO PAY TO BELONG TO THE COMPANY OF THESE FELLOWS”. Stanhope sculpted and erected a memorial to his son in their local parish church with the inscription: "I will get me out of my COUNTRY & from my KINDRED & from my FATHER'S house unto a LAND that GOD will shew me".