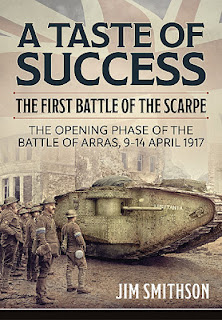 In loving memory of my Great Uncle James, who was killed on the first day of the Battle of Arras, Easter Monday, 9th April 1917, I have recently completed an exhibition about some of the soldier poets who were killed on that day. Great Uncle James, from Northfleet, Kent, UK, has no known grave but is commemorated on the Arras Memorial in France, so anything I can find out about the initial stages of the Battle of Arras is of great interest to me.

I was, therefore, particularly interested in reading Jim Smithson’s book “A Taste of Success. The First Battle of the Scarpe, The Opening Phase of the Battle of Arras, 9  – 14 April 1917”, which has recently been published by Helion & Company of Solihull, West Midlands, UK.

From first sight the book is wonderful and it is not easy to do justice to it in a brief review. No expense has been spared in the production of the book which compliments the time, meticulous research and dedication of the author. It is beautifully presented with colour photographs and a hard, coloured cover with a photograph of a tank.  I had no idea tanks were in use in WW1 before the Battle of Cambrai but now have a greater understanding of the first use of these weapons.

The Foreword has been contributed by a writer who has already written about the Battle of Arras - Jonathan Nicholls.  Written on Remembrance Sunday 2016, the Foreword sets the tone of the book.  Nicholls’ book was published during the 1980s when many of the WW1 survivors from both sides were still alive and he was able to interview then and walk the battlefields with them.

The Preface begins with a quotation from a poem by Siegfried Sassoon. Chapters 1 to 9 begin with quotations from poems by Edward Thomas, who was one of the poets killed on 9th April 1917 during the Battle of Arras.  Jim Smithson starts by explaining in detail the background to the Battle of Arras in 1917, going right back to the early stages of the conflict before the trenches were dug.  Detailed maps are included, as well as photographs of some of those who took part.   I was particularly interested to read the accounts of the German and French regiments involved, for instance the Moroccans in May 1915 and the New Zealand Tunnelling Company who were involved in the preparation of the tunnels made when the Allies built upon the quarries and caves underneath Arras.

I was also interested to read about the German use of bobby traps when withdrawing from areas.

On page 95 is a very comprehensive guide to the different first aid posts and hospitals to which the wounded were taken.

Smithson also goes into detail about the difficulties encountered by the British due to the sharing of the command with the French and the logistical problems of transporting and supplying the British Army’s 1.4 million troops who were based in France by 1917.  Also explained are the political arguments behind the army commanders, such as the Rome Conference in early 1917. The final chapter, “Epilogue and Conclusions” is particularly revealing.

In the Appendices you will find copies of official documents, reports and memoranda, copious notes on Sources, Bibliography and detailed lists of all the units involved in the preparations beforehand and in the Battle itself.

This compelling book is essential reading for anyone seriously interested in the history of the First World War.

“A Taste of Success - The First Battle of the Scarpe - The Opening Phase of the Battle of Arras, 9  – 14 April 1917” by Jim Smithson is published by Helion & Company of Solihull, West Midlands, UK. On sale at £29.95, the book is available from Amazon, from Foyles Bookshop in London and fromThiepval Visitor Centre and Arras Tourist Centre.