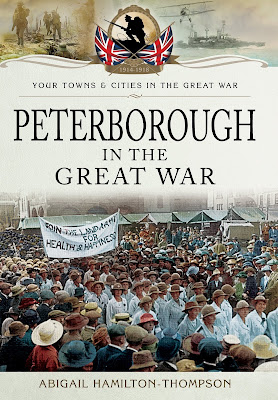 Having been born and brought up in Peterborough, I suppose I am – like many other people – somewhat blasé about the various monuments, buildings and other areas of historical importance around my home town. “OK, it’s the cathedral… so that’s Norman Cross… well, that’s the Butter Cross…”.  I was therefore very pleased with my copy of “Peterborough in the Great War” which has told me a huge amount about the place that I lived in for a great many years and I have been astonished to discover many facts that were completely new to me.

The main shopping street in Peterborough was widened and re-built in the 1930s with many new buildings being constructed, so it is quite difficult to imagine what that area of the City had been like during the First World War.  Cathedral Square has been pedestrianised and no longer houses the produce and cattle markets as it did in the old days but many of the buildings remain and can be easily recognised in the wonderful photographs that are reproduced in the book.

I worked for the big City engineering company Baker Perkins at its Westwood works plant for some ten years and, while I was aware of its role in producing armaments during the Second World War, from stories related by the old timers who were still working there when I was there, I was completely ignorant of the fact that Baker Perkins also produced arms during the First World War – although as the whole country turned itself to producing munitions, it should not really have come as any great surprise.

One fact that completely astonished me,  however, was that at the start of the First World War, the company was actually called Werner Pfeiderer and Perkins and – like the British Royal Family – was forced to change its name due to anti-German feeling.

Although I knew vaguely about “bicycle battalions”, I never really appreciated the relevance of them.  However, bearing in mind the fact that motorised transportation was still comparatively rare in the run up to the First World War, and beyond the reach of many for cost reasons, it makes perfect sense that the use of a bicycle to travel around was a huge advantage over “Shank’s Pony” and therefore these local bicycle battalions would have been a very useful mobile unit to have.

While obviously concentrating on the City of Peterborough itself, the book also covers the outlying areas which once again a local lad might not necessarily have given much thought to – particularly bearing in mind that back in 1914 – 1918 the “Great North Road” would have been a much lesser road than the high-speed dual carriageway that it is today and as such places such as Wansford, Nassington and Stilton would have been comparatively far-flung locations compared to today when they take only a few minutes in the car to reach.

Edith Cavell – the famous British nursing heroine – was very well acknowledged in Peterborough when I was growing up and she had a new hospital named after her, as well as a floor in the Queensgate Shopping Centre’s multy storey car park.  Abigail Hamilton Thompson’s book goes into more detail about Cavell’s life and I was pleased to learn more about her time in Peterborough than I previously knew.  In her similarly fascinating pre-war prologue in the book, she also mentions Florence Saunders, who was the Dean of Peterborough Cathedral and did great humanitarian works around Victorian Peterborough.

For anybody interested in the First World War, this series of “Your Towns and Cities in the Great War” by Pen and Sword will be of great interest, as they cover many places that don’t get much of a mention in more generalised history.  I have discovered many things about my home town that I honestly did not know and the “Peterborough in the Great War” book has also helped me to look upon places and things that I did know about in a whole new light.  I would heartily recommend this book and the others in the series.