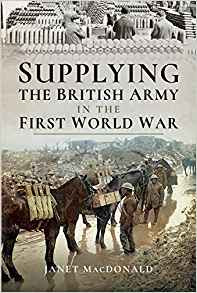 This is a remarkable and extremely important book.  I have read many books about WW1 over the years but this is the first time I have come across so much detail about the supplies and logistics involved that were vital to the success of the British and Allied armies involved in the conflict.

It is hard for those of us brought up with the Internet, satellite communication, mobile phones, apps, television and radio programes, global travel with roll-on roll-off ferry boats, jumbo jets and so on, to imagine what life was like in Europe in 1914 when none of those facilities existed. “Supplying the British Army in the First World War” is a real eye-opener and will definitely set you on the right track to a greater understanding of the problems encountered during the conflict.

The book highlights the problems involved in getting all manner of supplies to the British and Allied armies in the various theatres of The First World War - and what a headache that caused!   Information is clearly set out in two sections – I. The Western Front and II Beyond the Western Front.

Janet MacDonald’s painstaking and extensive research is truly amazing and there is so much detailed information in the book that it is extremely difficult to pick out just a few snippets for a review.  For instance, I never realised that horses were sent to Gallipoli or that supplies were transported separately to the transport of troops. It is incredible just how much building work had to be undertaken in France in order to unload, store and get all manner of supplies to the front lines.

Section Two has chapters on supplying Gallipoli, Salonika, Egypt, Palestine, Mesopotamia, East Africa, Italy and Russia - the other theatres of conflict during The First World War.  There is a section containing photographs, a Glossary, an Appendix with information about Weights and Measures, a Bibliography and a comprehensive index.

I would suggest that anyone studying WW1, as well as anyone with an interest in the conflict, really needs to read this book because, otherwise, it is impossible to understand the problems encountered by those in the front line.   If Janet MacDonald has not received an award for this book, to my mind, that should be put right at once.