With thanks to Daryl G Hudson, Admin on the World War One Facebook Group who gave me permission to share his post about Canadian poet The Reverend Frederick George Scott who I wrote about in a post on my weblog Forgotten Poets of the First World War 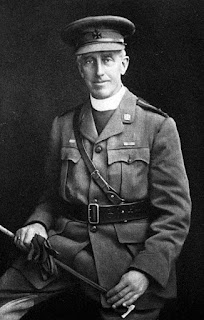 At the time of writing my previous post, I was unaware of Scott's search for his missing son.  Daryl Hudson says:

The Reverend Frederick George Scott  was serving as a Chaplain with the First Canadian Division in France when he learned of the death of his twenty-four-year-old son Henry, killed in October 1916 while leading an attack on enemy lines near Albert. After the chaos of battle, Henry’s body had been hastily buried between the lines, but could not be recovered.

Scott was able to return to the area near Regina Trench over a month later in mid-November, and with a runner, he found a cross marking his son’s grave. They began to dig until they exposed a hand wearing Henry’s signet ring. Removing the ring, the chaplain read the burial service, then “made a small mound where the body lay, and then by quick dashes from shell hole to shell hole we got back at last to the communication trench…. It was a strange scene of desolation, for the November rains had made the battle fields a dreary, sodden waste.”°

A working party brought Henry Hutton Scott’s remains back behind the lines on Nov. 24. His father was there as they "laid my dear boy to rest in the little cemetery on Tara Hill …. I was thankful to have been able to have him buried in a place which is known and can be visited .… In June of the following year, when the Germans had retired after our victory at Vimy Ridge, I paid one more visit to Regina Trench. The early summer had clothed the waste land in fresh and living green. Larks were singing gaily in the sunny sky. No sound of shell or gun disturbed the whisper of the breeze as it passed over the sweet-smelling fields. Even the trenches were filling up and Mother Nature was trying to hide the cruel wounds which the war had made upon her loving breast. One could hardly recall the visions of gloom and darkness which had once shrouded that scene of battle. In the healing process of time all mortal agonies, thank God, will finally be obliterated." 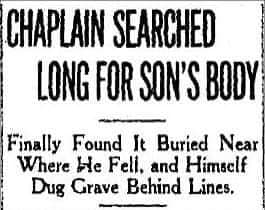 Frederick George Scott, known as the poet of the Laurentians, was an Anglican priest before the war. He volunteered as an Army Chaplain in August 1914 and recalled his thoughts when he stood in the pulpit that same Sunday: “When I was preaching at the service and looked down at the congregation, I had a queer feeling that some mysterious power was dragging me into a whirlpool, and the ordinary life around me and the things that were so dear to me had already begun to fade away.”

The wood [Ploegsteert] in those days was a very pleasant place to wander through. Anything that reminded us of the free life of nature acted as a tonic to the nerves, and the little paths among the trees which whispered overhead in the summer breezes made one imagine that one was wandering through the forests in Canada. In the wood were several cemeteries kept by different units, very neatly laid out and carefully fenced in. I met an officer one day who told me he was going up to the trenches one evening past a cemetery in the wood, when he heard the sound of someone sobbing. He looked into the place and there saw a young boy lying beside a newly made grave. He went in and spoke to him and the boy seemed confused that he had been discovered in his sorrow. “It’s the grave of my brother, Sir,” he said, “He was buried here this afternoon and now I have got to go back to the line without him.” The lad dried his eyes, shouldered his rifle and went through the woodland path up to the trenches. No one would know again the inner sorrow that had darkened his life.

“The Great War as I Saw It” by Canon Frederick George Scott, C.M.G., D.S.O. (F. D. Goodchild Co, Toronto, Canada, 1922) is available to read as a free download on Project Gutenberg: 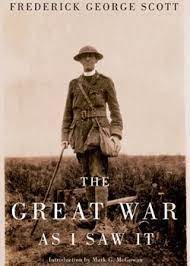