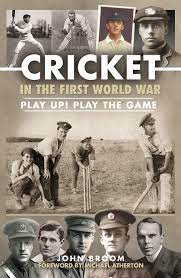 “Cricket in the First World War: Play up! Play the Game” is by John Broom and has a fantastic Foreword written by former England International cricketer Mike Atherton, who was described in 2001 as a ‘determined defensive opener who made "batting look like trench warfare”’. Mike Atherton is now chief cricket correspondent of “The Times” newspaper.  (Pen & Sword, Barnsley, 2022)

The cover design is by Paul Wilkinson.

This wonderful book is the perfect gift for a cricket fan who is also interested in the First World War.

Although I knew, through seeing the map of Australia drawn in the chalk downs by Australian soldiers who camped at Hurdcott Camp in Wiltshire while waiting to deploy or recuperating during WW1 when I was in my late teens, I did not know there was a magazine called the “Hurdcott Herald” in WW1. Nor did I know there was a baseball game played at Lord’s in London between Canadian and American teams in aid of the Canadian Soldiers’ Widows and Orphas Fund in 1917. (p. 163).

As I am also interested in the lesser-known artists and poets of the First World War, I was interested to discover both a poet and an artist I had not come across before.  And there is a mention of the poet and writer Siegfried Sassoon MC, whose work I admire greatly.  He loved to play cricket and the Siegfried Sassoon Fellowship organise a special commemorative game every year.

I found so many fascinating facts that I could go on and on but I am planning to write briefly about some of them in my various weblogs AND I don’t want to spoil your enjoyment of the book and the discoveries you will make.  With copious photographs, a detailed Index, interesting source list and excellent Bibliography, if, like me, you are a cricket fan, this is a book you will definitely want to refer to again and again.

“Cricket in the First World War: Play up! Play the Game” begins and ends with mention of the famous 1892 cricketing poem by Sir Henry Newbold -   Vitaï Lampada ("They Pass On The Torch of Life").